The Best and Worst Moments of 2021

The Best and Worst Moments of 2021 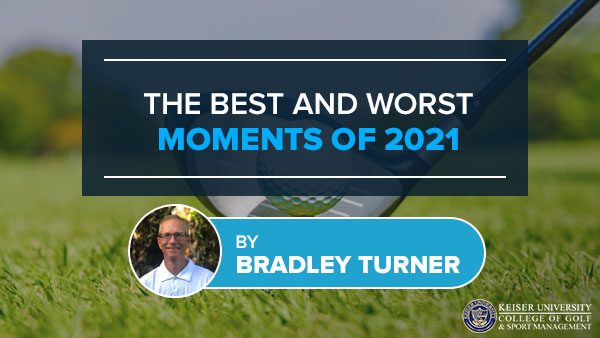 A look back on the 2021 season tells a story of overcoming the uncertainty of a pandemic at the start of the season and blossoming into another memorable year in professional golf. Despite the ever-changing stars of the sport, the game of golf has been and always will reveal the best and worst moments of the world’s best golfers.

#5 American Gold at the Olympics

For the American fans, watching Xander Schauffle play a brilliant wedge to the 72nd hole and make the putt for the gold medal was a feel-good ending for Xander. Winning the gold medal for the world’s best players may not rise to the level of a major championship, but it does continue to build in importance. Nelly Korda won the gold medal the following week, completing a sweep for the American team. The lack of depth in the field hurts, but for Xander and Nelly, it must be a unique feeling to display Olympic gold in the trophy case!

The American team dominated the 2021 Ryder Cup from start to finish. Even though the outcome was evident going into Sunday’s singles matches, the event was great viewing for golf fans. Ryder Cup captain and Wisconsin native Steve Stricker assembled a unified team that performed beyond expectations. As for the European team, nothing illustrated the spirit of the Ryder Cup competition more than a heartfelt and teary-eyed Rory McIlroy interview after the Sunday matches. I suspect the Euro’s will be led by a highly motivated McIlroy to take the cup back in 2023.

The Masters always seem to get things right, and this year was no surprise. Lee Elder joined Jack Nicklaus and Gary Player on the first tee as an honorary starter. Unfortunately, Lee was unable to strike a tee shot on the first tee due to health reasons, but his presence was a great moment for golf and very deserving for Elder. As Tiger Woods stated after his Masters Tournament victory in 1997, “He was first. He was the one I looked up to. Because of what he did, I was able to play here, which was my dream.”

A much talked about moment in golf this year was the respect paid by Hideki Matsuyama’s caddy after Hideki holed out on the 72nd green to win the green jacket. A respectful bow to Augusta National after replacing the flagstick on the 18th green confirmed the sentiment so many have about everything related to Augusta National. The place is simply special and clearly the cathedral of professional golf.

Winning the PGA Championship as a 50-year-old senior golfer was the best moment in 2021. The spectators were back behind the ropes supporting the players, and Phil provided plenty of excitement for them. The Sunday final pairing of Brooks Koepka (-6) and Mickelson (-7) had the pundits predicting a Koepka victory. Who knew Phil would hold off Brooks and win the sixth major championship of his career? Phil now holds the record for the oldest golfer to win a major championship. If he continues to hit “bombs” off the tee, Phil will likely be on the first page of the leaderboard in another major championship in 2022.

The American team was the betting favorite against the European team, but they were unable to secure a victory at the Inverness Club in Ohio. The fan support was incredible for Team USA, but the American putts were not falling. A close competition with Europe winning 15-13, and a bitter pill for the better team on paper to swallow.

This was painful to watch. Lexi Thompson held a four-stroke lead standing on the 10th tee at the Women’s US Open at Olympic Club in San Francisco. Like some of the hall of fame players before her, including Arnold Palmer and Ben Hogan, she was unable to close for the win. The back nine at Olympic has not been kind to tournament leaders. Lexi played the back nine in 41 strokes (+5) which included bogeys on the last two holes to miss a playoff by one stroke.

#3 Rahm at the Memorial

Jon Rahm completed his third round at the Memorial Tournament with a six-stroke lead only to find out that he had tested positive with COVID-19. He was forced to withdraw from the tournament, unprecedented circumstances for the PGA Tour. The uproar from fans was expected, but the COVID protocol was in place. To Rahm’s credit, he never complained about the decision and remained optimistic. His great play continued in his next start, winning the US Open at Torrey Pines. I think the golf gods shined down on Rahm in the last round of the US Open…a deserving major victory for the young star.

Norman has had the idea of a professional tour for elite players for two decades. This revised version of his world tour vision 20 years ago will directly compete against the PGA Tour and the DP World Tour (formerly the European Tour). Today, the elite players are making an enormous amount of money on the course and with endorsement opportunities. There are plenty of opportunities on the PGA Tour and DP World Tour for the best players to choose a schedule and support both tours. Norman wants to add a third option, which will dilute the field of existing events. Professional golf does not need an old idea designed to help a select few.

This was the worst moment in 2021. Early in the year, there was the anticipation of Tiger returning to Augusta National in April after another back surgery. Tiger was progressing on schedule, but a freak accident derailed everything. The golf world was stunned by the news of his car accident. A severely injured Tiger was in a hospital bed for three months and recently spoke about the long and painful recovery process. He was seen hitting a golf ball this week, and there is now hope of his return once again to Augusta. He has a long way to go to make it back to competitive professional golf, but I am confident we will see him playing again in 2022.