A Game of Opposites

A Game of Opposites

A Game of Opposites
By Dr. T. J. Tomasi, Keiser University College of Golf Senior Faculty and Director of Research 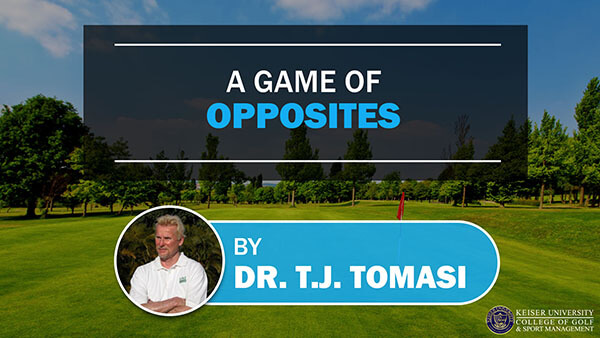 Golf is filled with misconceptions, more so perhaps than any other game. Why – because the game is counterintuitive. Even though your brain is problem-solver par excellence, it’s often fooled when it comes to golf. Games like Frisbee or Kick the Can present “point-A-to-point-B” problems that are easily solved, so they require little, if any, instruction. But in golf, because you must stand to the side of the ball, the brain misinterprets the problem. Here are a few of the counterintuitive aspects of golf that make lessons a good idea for most golfers:

And then we have the mother of all puzzlements: The average golfer tries to get the clubhead onto the target line at the start of the downswing. This makes sense since that is where the ball is, but it causes the most common swing error in golf, called “over the top.” The good player learns to do just the opposite — keep the club off the target line until just before impact. In the photos here you can see the difference in shaft position. When you try to force the clubhead onto the target line too early, the shaft is steep, meaning that the arc of your swing is much too abrupt. It’s like trying to land a plane using an extreme vertical descent – unless it’s a helicopter, you’re in for a crash landing. 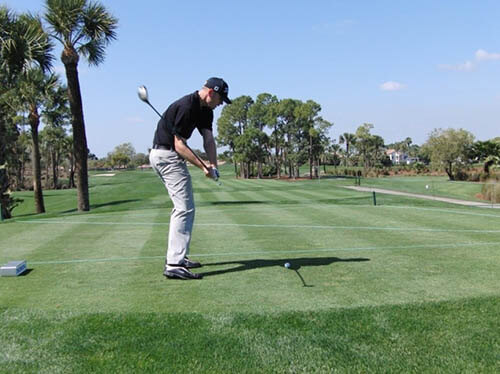 Note how this pro’s clubshaft is under his shoulder with the butt end of the club pointing at the ball. His hands are almost at impact, and the clubhead hasn’t swung out toward the ball yet — very counterintuitive, but a good way to play great golf! 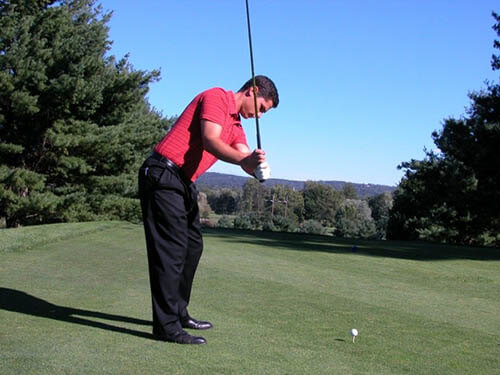 By trying to force the club onto the target line from the top of his swing, this player creates a precipitous approach to the ball that won’t end well. To avoid an accident at impact, practice hitting the inside of the ball rather than the back of the ball. Of course, you don’t actually do that, but it’s better to fool yourself into doing something right than it is to practice something that is wrong.