“Shear” Torture for Your Back

“Shear” Torture for Your Back 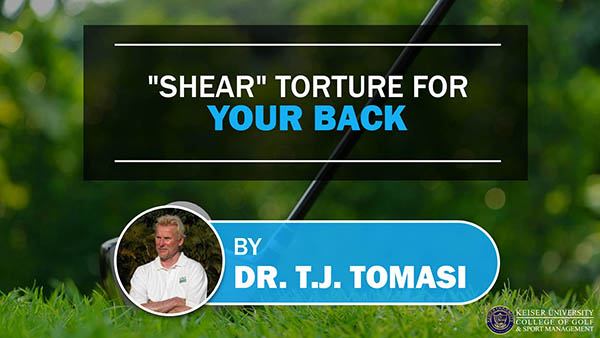 “Shear” is the force produced when two structures oppose each other and attempt to slide past one another causing a twisting force.

An Earthquake in Your Back

Two hundred million years ago North America split, producing tectonic plate-like slabs or crusts separated by a cushion of fluid. When they slide about, the friction produces earthquakes. This is similar to your back, which is made up of vertebral crusts of bone separated by gelatinous-like discs that cushion out the majority of the shearing forces your back is exposed to when you swing a golf club.

While a good golf swing is hard enough on your body, a bad golf swing can do even more damage by increasing the shear force on the vertebrae beyond the protective limits of the discs. Below is a case in point: Stopping the trail shoulder during the downswing while the hips continue to rotate — ouch! 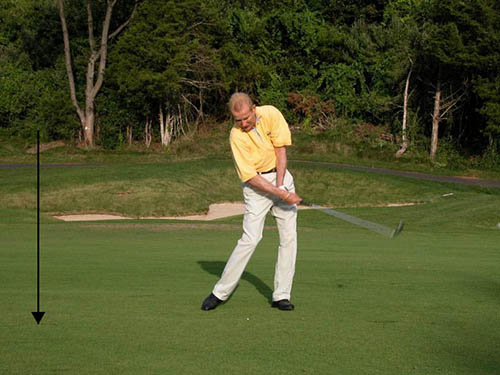 This photo was taken shorty after a car accident where I was rear-ended at ~ 90 mph. I shouldn’t even be swinging a club but note how I protect my spine by using mostly arms. Note also how my back shoulder and chest have stopped (see arrow) transferring much of the 100+ mph force to the wrist – the weakest link in the energy transfer system. This collapse is caused when you “run out of right arm.” Basically, the right elbow that folded during the backswing expands its angle without concomitant rotation of the shoulders. This straightening of the right arm puts a great deal of pressure on the left wrist, causing it to buckle.

This chain reaction is caused by stopping the rotation of your upper body while the hips continue their way. It’s most prevalent in golf swings that feature an open face at the top of the swing because that face must be squared up by impact and stopping the chest is one way, albeit the wrong way, to rotate the face. To stop this, you need to sync your upper and lower body as the tour player in the bottom photo has done. 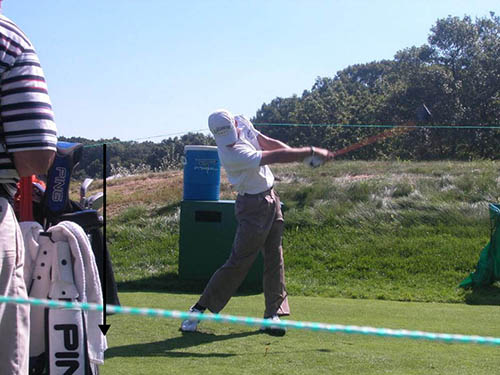 Tour player Charles Howell fires his entire right side through the ball allowing the force of his swing to straighten both arms just after impact, the only time in the swing where both arms should be fully extended. See how there is no hold back of his trail shoulder (arrow) — he’s just letting it go. By allowing his chest and right side to rotate fully, he is removing a lot of strain from his lower back. A 12-ounce club swung at 100 mph has an effective weight of ~70 lbs. at impact, so stopping the shoulders forces the hips to rotate by themselves setting up a shearing force that can shatter vertebrae.

To be safe and to hit better golf shots, keep everything that’s rotating, rotating through the ball. Therefore, the pros have those full follow-throughs — the back shoulder chases the front shoulder from the top of the backswing to the top of the finish.

END_OF_DOCUMENT_TOKEN_TO_BE_REPLACED

Throwing Your Weight Around

What Does A Career In Golf Course Management Entail?