11 Biggest Golf Swing Mistakes (and How to Fix Them)

11 Biggest Golf Swing Mistakes (and How to Fix Them) 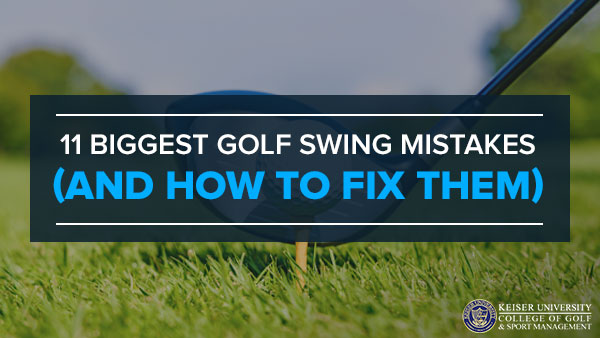 With all the moving parts of a golf swing, there are a thousand things that can go wrong.

The driving range is a showcase of golf swing mistakes. But many golfers would improve dramatically just by eliminating big mistakes — foundational problems that instantly create a number of follow-on errors.

Here are some of the big mistakes you may be making with your golf swing.

Nothing will ruin your swing faster than trying to hit it 300 yards off the first tee without warming up. It’s more common than you think.

This affliction is commonly observed on any local course on Saturday morning. Golfers either think they are too cool to warm up, or they don’t know how.

Before the round, work through your bag by taking smooth swings with each club, starting with the wedges and progressing to fairway metals and driver. Limber, loose, warm muscles are the key to a relaxed, powerful swing.

For some reason, many golfers have the impression that all clubs are the same. Perhaps they pick up a set on sale at a local department store, and then wonder why they are having problems with their swing.

As experienced golfers know, getting fitted correctly with the right clubs will go a long way toward eliminating many swing flaws without any additional effort by the golfer.

In the past few decades, the finesse aspect of golf has given ground to the power side of the game. Equipment manufacturers are partly to blame because much of their marketing talks about power and distance gains.

On the other hand, they are simply responding to what golfers say they want. Survey after survey shows that the number one thing golfers want is more distance and power. In an attempt to achieve these goals, golfers tend to swing way too hard and too fast.

While it is true that a faster swing will technically produce a longer shot, the ball must also be struck in the middle of the clubface. Average golfers do not have the skill to swing at tremendous speeds and hit the ball cleanly. By slowing down, you will give the swing time to happen in proper sequence. Your shots will be cleaner, you’ll get healthy distance and much more consistency.

Maybe it is a symptom of trying to swing too hard, but gripping too tightly on the club is a common error. It’s as if golfers think someone is going to come up behind them and grab the golf club out of their hands and run off down the street with it. In some cases, you can see the veins popping out of the hands and wrists as they hold on with all their might.

The swing is an athletic motion and requires a loose, flowing action for optimal results. Gripping too tightly actually slows down the swing because the muscles are stiff and ineffective.

If you are trying to throw a softball underhanded from behind home plate to the pitcher’s mound, you wouldn’t turn your body toward third-base. Yet that is what golfers do every day. Poor alignment is a major contributor to bad shots.

Often they line up their feet aiming directly at the target. In reality, the toes should be lined up parallel to the target line. Think of the target line and the stance line as the two rails on a railroad track. They are going in the same direction, but the left rail will always be aimed slightly to the left of the right rail, not at the exact same point.

The thing to keep in mind about alignment is that it must be continually maintained. Even professional golfers work hard at checking their alignment regularly. This is easily done by placing alignment rods or golf clubs on the ground during practice sessions. It helps to have a professional or friend check your alignment to make sure what you see is an accurate picture.

Timing is a critical element in a productive golf swing. Timing is the art of allowing the sequence of positions to unfold naturally. A well-timed swing looks of fluid and unhurried. It moves slowly but steadily to the top of the backswing and then seems to pause while the lower body begins to turn toward the target, building up power ready to be released.

Good timing is created by lots of repetition. Golfers get into trouble when they do not practice their timing, and to fall back on bad habits once they get to the course. Daily drills that bolster a well-timed swing will pay off in spades on the next match.

The grip is where the rubber meets the road. It is the only contact your body has with the club. When you have an incorrect grip, you set off an unfortunate sequence of events that can only result in disaster.

It should be firm, but not tight. Avoid holding the club too much in the palms. This reduces the ability of your wrists to operate freely. The club should be more in your fingers, which are the most sensitive areas of your hands.

Relax and let your hands grip the club naturally so that the palms face each other, and are not turned too far to the left or right. The Vs between your finger and thumb should point at, or just outside, your right shoulder.

Have you ever been in a car with someone learning how to drive a manual stick shift? The driver does not press on the gas pedal enough while letting out the clutch, so the car jerks to a stop and stalls. A manual transmission requires that you accelerate smoothly for the clutch to engage with precision.

Your swing is similar.

Many amateurs tend to decelerate on the forward swing, rather than creating swing that smoothly builds up speed. The telltale sign of deceleration is when they look like they are scooping at the ball. This evidences a lack of trust in the swing.

Proper acceleration goes back to our previous discussion about timing. The club will build up tremendous power as it comes down and threw the ball, but only if you do not interrupt the free-flowing action.

Shooting at the Flag

Sure, if you are Bubba Watson, go ahead and take dead aim at that flag. The rest of should be content with hitting the center of the green and putting from there. Jack Nicklaus credited his long, successful career to playing to the middle of the green and relying on his top-notch putting skills.

Putting will always have a higher success rate than chipping or sand play, so put it on the green, and get a solid par. Save the heroics for the company softball team.

Lack of a Full Shoulder Turn

The real power in a golf swing comes from leverage. Golfers lose this leverage when they fail to make a full shoulder turn.

Commonly, they make a fake shoulder turn where they bend the left arm in an attempt to extend the backswing. This cuts off any chance to use the power and torque stored in the wind-up of the shoulders.

Swinging Over the Top

You may have heard the term “over the top” many times but not fully understood its meaning.

Remember that the swing is moving both up and down as well as back and forth. At the top of the swing, amateur golfers begin to turn their shoulders on the forward swing before they give their arms a chance to fall down on an inside path. The club swings wide over the proper swing path like an airliner banking before final approach, and then cuts across the target line.

For right-handed golfers, the result is the dreaded slice or banana ball.

Often we make our swing harder than it really is. Eliminate these big golf swing mistakes, and you’ll see rapid improvement.

Check out some of our golf swing tutorials on YouTube:

Should I Keep my Left Arm Straight During My Golf Swing?

After that, getting rid of small errors is a piece of cake. Along with top-quality instruction for a successful career in the golf industry, Keiser University College of Golf and Sport Management will help you fine tune your golf game.