Who are Tomorrow’s Stars – 2nd Edition

Who are Tomorrow’s Stars – 2nd Edition 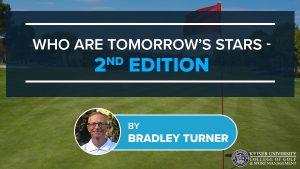 Last year, after the Korn Ferry Tour’s conclusion, I predicted which of the graduates would make a difference on the PGA Tour in 2022. I based my analysis on three essential elements in professional golf, and then I selected the five Korn Ferry Tour graduates who fit into my formula for success. The first element of the formula was that the player had to have won a Korn Ferry Tour event during the year. The second was the critical skill of hitting greens in regulation. The final element of the formula was driving distance. Hitting the ball long off the tee makes it much easier to hit greens in regulation, leading to a higher probability of victory. A pretty simple formula! So, how accurate were last year’s predictions?

It is rare to find a PGA Tour star that did not win at every level of competition as they learned to compete. Winning a local junior tournament can breed the confidence to be successful in regional and state competitions. Most PGA Tour players won a few tournaments as college players, which further enhanced their self-efficacy to win at the next level. The Korn Ferry Tour is the next step for college players, so those that have been able to close out tournaments will also have the confidence to compete against the best in the world.

PGA tour players indeed have amazing short games, and most all can handle the flat stick on the greens. However, to be a consistent money winner on tour, a player must hit at least 67% of the greens in regulation. Considering the difficulty and length of many PGA Tour venues, putting for birdie 12 times out of 18 holes is fantastic.  I believe that plenty of amateur golfers have tremendous short games and can roll the ball in the hole like a PGA Tour player. What separates a PGA Tour player from an avid amateur golfer is the ability to strike a golf ball with authority and incredible consistency. If you can’t hit the ball well, your short game will not save you on the PGA Tour. As I noted in last year’s article, Lee Trevino said, “There are two things that won’t last long in this world. Dogs chasing cars and pros getting up and down for pars.”  Trevino’s comment will be valid as long as the game is played.

How difficult is it for a short hitter to play on the PGA Tour? The answer is very difficult!  In 2022, of the ten shortest hitters on the PGA Tour, seven failed to crack the top 125 on the FedEx points list. Only Brendon Todd, Chez Reavie, and Andrew Putnam secured their playing privileges for 2023. On the other hand, of the top 10 longest drivers on the PGA Tour, only three failed to retain their PGA Tour card for 2023. Interestingly, the top 10 in greens in regulation all finished in the top 125 of the FedEx points race, while only three of the ten lowest players retained their card. Let’s look at last year’s predictions before looking at the projected stars of tomorrow.

My Top Five from Last Year – Money List Results in 2022

Will Zalatoris (3rd) – Not only has he made a difference on the PGA Tour, but he has also become a star on the tour. He finished 3rd on the money list, including a late-season victory and runner-up finishes in the PGA and US Open.

Cameron Young (10th) – A third-place finish at the PGA and a runner-up finish at the Open Championship in St. Andrews has catapulted Cameron into the potential PGA Rookie of the Year. A top-10 finish on the money list is a tremendous accomplishment for this rookie.

Davis Riley (33rd) – Consistent play throughout the year with solid ability in all aspects of the game. Look for Davis to continue with great play in 2023.

Mito Pereira (46th) – If only he hit fairway metal off the tee on the 72nd hole of the PGA championship! A disastrous double bogey cost him the Wannamaker Trophy. All in all, a perfect season for Mito.

Curtis Thompson (183rd) – Thompson continues to hit the ball long and finished the year in the top 60 in greens in regulation. What happened to Curtis? He ranked 188th in putting. Even if you hit it long and straight, you still must be able to make some putts.

Here are the predictions of the top Korn Ferry graduates who will become the stars of tomorrow.  These five have been selected because they all won at least one Korn Ferry Tour event in 2022, combined with high-level ball striking and distance off the tee.

Byeong Hun An – A three-time international tour winner, Ben An ranked 3rd in distance and 34th in greens in regulation last year. He has experience on the PGA Tour, so this year it is a good bet that he will break through in 2023 with some quality top-10 finishes.

Davis Thompson – The future of golf looks like Davis. At 6 feet 4 inches and only 23 years of age, this may be the best pick of the bunch. A University of Georgia All-American and former number-one amateur in the world, he has plenty of alumni on the PGA Tour to help him during his rookie season.  I see a PGA Tour win in 2023 for Davis.

Trevor Cone – Similar in stature to Davis Thompson, Trevor is long off the tee, ranked 8th, and is 11th in greens in regulation. If he can get his putter warmed up, he has the ball-striking capability to contend for rookie of the year.

Carl Yuan – The soon-to-be star from China may be the best all-around ball striker graduating from the Korn Ferry Tour. Ranked 8th in greens in regulation and seventh in driving distance, this 25-year-old will likely have a strong year in 2023.

Justin Suh – At the age of 25, Justin has some playing experience on the PGA Tour, and his length off the tee should be a real asset as he takes his game to the next level. Ranked 5th in greens in regulation last year, the highest ranking of the five projected stars of tomorrow.

As the fall season is underway, the PGA Tour is ready for a new season, with a few old stars playing the LIV tour while new ones take their place. It will be another exciting season for golf fans with the new faces and names appearing on the leaderboard. Look for the five players above to become contenders for PGA Tour titles. If my predictions hold as they did in 2022, we will see a victory or two from these five in 2023.