Which Type of 80’s Shooter are You?

Which Type of 80’s Shooter are You? 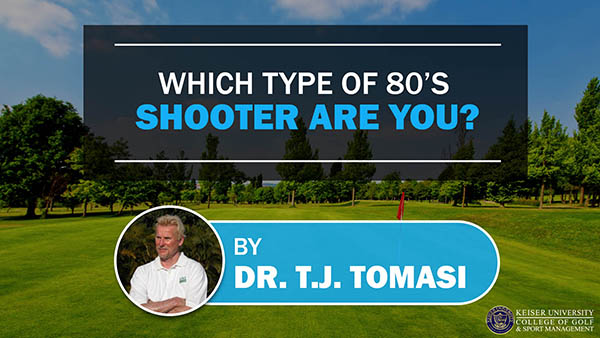 According to the National Golf Foundation, a bunch of people who get paid to figure stuff like this out, the average score shot by the 25 million or so American golfers is ~102. A mere ten percent of all players consistently break 100. Only five percent break 90 and less than one percent break 80. In a typical round, golfers who consistently break 100 but fail to shoot lower than 90 hit only four fairways with their tee shots, take 40 putts, and usually don’t make any birdies. Golfers who consistently shoot lower than 90 typically hit six fairways with their tee shots, take only 32 putts, and commonly make no more than one birdie during the round. At first blush, that probably doesn’t seem like much of a statistical difference to you. Certainly, it’s not a difference so insurmountable that you can’t close the gap. So, what is it about the 80’s shooters that sets them apart from the 90’s shooters?

There are two types of 80’s shooters. The first type is made up of better-than-average ball strikers who don’t have the time or inclination to work on their short game or think about course management. They could probably shoot in the 70’s if they spent some time to upgrade their short game and management skills. The other type of 80’s shooter doesn’t strike the ball much better than the golfer who shoots 95 every week, but their overall game is enhanced by their deftness at those parts of the game, which don’t require as much strength and flexibility. Those things are putting, chipping and sand play, course management, and brain management, including keeping their emotions under control. There’s a great deal of hope for both groups – in fact, the strategies necessary to improve, no matter what your current game is like, can be used by any player from expert to beginner. The rule is: always put yourself in a position, so your next shot is one of your strengths.

Jack Nicklaus used his Strength and Weakness profile to win a record number of majors. He was especially famous for two strengths:

1) His ability to hit high long irons that would hold the fast greens typical of the majors.

2) He was a great lag putter from long distances. On the last day of a major, when everyone else was shooting at the flags, Jack would hit a three wood off the tee, a long iron into the middle of the green, and lag his putt stone dead while other players crashed and burned trying to make birdies.

When he first came out on tour, Hall of Famer-to-be Lee Trevino’s major weakness was his bunker play – ball striking-wise, he was a +6, but from the sand, he was a 10 handicap. It didn’t take him long to seek out Gary Player, then the world’s best from the sand, to ask him for help. By identifying a major weakness and turning it into a major strength, he could safely shoot at more flags. This meant that he made more birdies and less bogeys, a strategy that made Trevino one of the greatest players in history.

To be the best player you can be at any given time, self-knowledge in the form of a comprehensive Strength and Weakness Profile is a necessity.  The following questionnaire will help you increase your self-knowledge.  Keep in mind that the better the player, the more accurately he or she can answer each of these questions.  If you don’t know the answer to a question, be sure that you take steps to find out. Once you have answered all the questions, bring the information to your PGA teaching pro so the two of you can develop a program for improvement.

Can You Work the Ball?

How good a wind player are you?

What are your dragons (mistakes and swing flaws that continually recur)?

Why do you think you hit this shot?

What shot do you fear hitting the most?

Note: Because of their ability to compensate, the better player often fears a shot other than their typical bad shot.  For example, you may fear a hook, but your typical miss is a block (straight right).

What is your miss pattern?

Which is your dominant eye? ___

Are you taking any medication that affects your stamina, balance, or vision? __________

Have you checked your lofts recently? ______

What is the composition of the ball you use?

What is its spin rate?

(Many good players have three distance gradations for each club, as in a little seven-iron, a regular seven and a nuke seven.  This allows a high-level player to cover all the distances encountered on the golf course.  If your goal is to compete at the higher levels, you should practice this skill with all your clubs, including your driver.)

END_OF_DOCUMENT_TOKEN_TO_BE_REPLACED

How do Golf Courses Prepare for Severe Weather?