What to do When You Have Too Much Information

What to do When You Have Too Much Information

What to do When You Have Too Much Information
By Dr. T. J. Tomasi, Keiser University College of Golf Senior Faculty and Director of Research 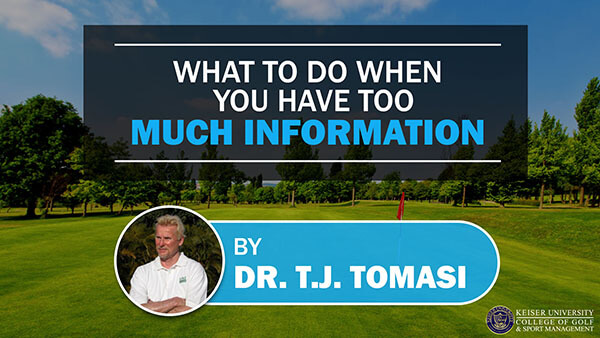 A player came to me with a very common problem. He had no routine and never started behind the ball in order to plan his shot. When I asked why he explained that when he started from behind the ball, it was confusing – there was just too much information.

Many experts believe that when a person with a certain type of dyslexia looks at a complicated or visually busy scene, there is an impaired ability to filter out visual and auditory distractions (noise). This makes it hard to distinguish the important sensory data from the irrelevant. I had a hunch; this was my student’s problem, so I asked him, and he confirmed that he was dyslexic. The golf course is rife with lots of visual clutter – the sound and sight of the trees blowing, the mounding designed to create optical illusions, bunkers that appear greenside but are actually 20 yards farther away, the sun in your eyes, and, of course, those intimidating railroad ties that Pete Dye will suffer for in the afterlife. Yet, even with all the chaos, there are some very good players who are dyslexic, including PGA Tour star JB Holmes – so it is possible to overcome the disability if you know how to control the interference – something all golfers must learn to do.

This leads us to an important principle: if you remove the interference, you remove the disability. And what intervention technique can you use in golf that removes the interference? The answer is a simple one – develop an air-tight Pre-shot Routine. When I say ‘air-tight,’ I mean that the steps and their sequence (starting behind the ball, taking a relaxing breath, imaging the shot, etc.) are so well-practiced that there is no room for distracting clutter.  Since each step is driven by your brain’s “Where’s Waldo” search engine, you are directed to find specific content. Guided by the structure of your routine, your brain learns by experience to filter out anything that’s not part of that content. In a good routine, no matter what’s out there, you see only what you need to see. I have stated elsewhere that the great players don’t see the same golf course that most players see – in this regard, let me add – the better the player, the less they see. Aside: One of the world’s greatest bow and arrow shooters is legally blind. When asked how he shoots so accurately, he explained that all he can see is a blotch of color, and he aims for that. Basically, he uses his disability as a filter of extraneous data. Thus, he sees the least and shoots the best.

The routine done correctly teaches the student to concentrate while looking for specific kinds of information at every step – and, depending on the step, the info they are looking for changes. The point is that being a pro-active observer with an air-tight routine is much different than being just a passive viewer where the scene washes over you like a tsunami, drowning you in a sea of input.

You act on what you image: When you’re a passive observer, you are at the mercy of the scene – if it is simple and uncluttered, you are OK, but if it is busy and untidy, you are forced to hit the ball in a state of uncommitted confusion. One of the principles of military strategy is to make the battlefield asymmetrical, thereby demanding lots of adjustments on the part of your adversary – if you can make your opponent change their strategy, maybe they will make a mistake. This sounds a lot like how your friendly architect defends his/her golf courses.

Note 1: In my opinion, there is a little bit of dyslexia in all golfers, and those who use a precise routine create an effective filter that makes information sorting easier. The most common behavior of dyslectics is their inconsistency, so adherence to a routine is often just the ticket. Dyslectics think in pictures, and the pre-shot routine is all about imaging – that’s a nice fit.

Note 2: And how did my student turn out once he perfected a routine that allowed him to filter out the interference? When I found out he was dyslexic, I taught him using video of himself so he could frame his routine in pictures. He told me that it was the first time he ever played golf with a sense of commitment to the shot. So it was that his confusion level dropped, and so did his scores.