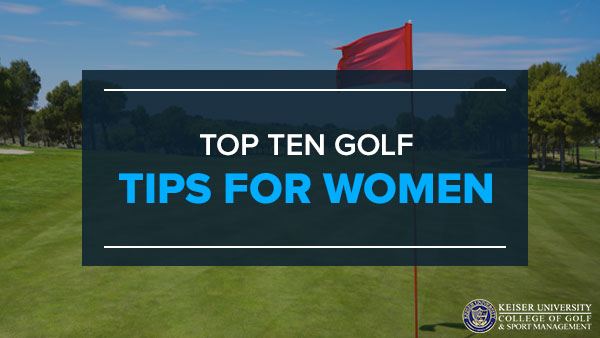 In 2015, an esteemed British golf club named Royal St. George voted to let in female members. It was the end of a 128-year-old male-only system. The same thing happened in 2012 at Augusta National in the US, when they added Condoleezza Rice and Darla Moore as their first female members since the beginning of the club in 1932.

These are but a couple of the welcome harbingers of change in the world of golf.

According to HSBC, there are more than 80 million golfers around the world, and almost 20 percent of them are women according to a report by the National Golf Foundation. The Wall Street Journal reported that 67 percent of new golfers were women. More women are taking up the sport, and working in the golf industry, than ever before.

Bend at the Hips

At times, beginning women golfers tend to bend at their knees rather than tilt their body at their hips.

A similar error is to bend at the waist rather than the hip joints. Bending at the waist promotes an overly-rounded and bent over back angle, creating a weak foundation that makes it difficult to build a repeating swing.

A good golf swing is built around a correct grip. Since it is the only contact you have with the club, if the grip is unsound, the swing will begin incorrectly and proceed to get worse as it develops.

A correct grip starts with standing with your hands and arms hanging loosely and naturally. Without changing the angle or position of your hands, place the golf club in your left hand, making sure the clubface is square to your target line. The club will run in a diagonal line across the fingers, and the butt will end up on the bottom portion of your heel pad.

A common error is to hold the club in the palm of the hand. In reality, a golf club lies in the fingers. Looking down, you should be able to see the knuckles of your left middle and index fingers. If you see four knuckles, your hand is turned too far to the right, and if you only see one knuckle, it is turned too far to the left. Take your right hand, and wrap it around the club, placing the pad over your left thumb. You’ll notice two Vs in between your index finger and thumb on each hand. They should point slightly inside your right shoulder.

Swing Through the Ball

While hitting the ball cleanly, crisply and powerfully is your ultimate goal, it should not be how you think about your swing. Your swing should remain relaxed and fluid, and focusing too much on hitting the ball itself will create an awkward, hurried effort and a herky-jerky result.

A telltale sign is if you take the club back slowly and surely, only to jerk it down from the top of your swing and slap at the ball haphazardly. Instead, think about the idea of “hitting the ball with your practice swing.” Admittedly, it takes some practice to make this mental shift. However, once you can hit through the ball using the same relaxed approach you use in your practice swing, the ball will take care of itself. It will jump off the club with velocity and accuracy.

Accuracy and strategy are equally important when attempting to shoot low scores and improve your handicap. However, power does play a big role in the game, and let’s face it, it’s a lot of fun.

To set up properly to hit the ball far, you need to create room for your body to torque properly, and unwind through the ball with authority. To do this with your driver, for example, create a wide stance with the ball positioned slightly forward. Place 60 to 65 percent of your weight on your rear foot, with your head and upper torso tilted slightly back. With a relaxed stance, hold the driver and allow approximately the space of one open hand between your body and the butt of the club.

Power in the golf swing comes from creating tension between your upper and lower body, and unwinding that force gradually and smoothly.

You can gain yardage by increasing the resistance in your hips. The higher the degree of angle between your shoulders and hips, the more stored-up power you create. Renowned golf trainer Jim McLean dubbed this angle “The X Factor.”

Think of how a baseball player holds the bat and almost turns her back to the pitcher. As the ball comes across the plate, her hips begin to unwind well before the shoulders, and the bat comes around last with significant power, almost like a slingshot.

This tip is somewhat related to our recommendation to swing “through the ball.” Longer clubs such as the driver, 3-metal, 5-metal and 7-metal are best hit by sweeping the club head along the ground, collecting the ball in the process.

With mid and long irons, you “hit down,” making contact with the ball slightly before the club.

However, with the driver and longer clubs, place the ball slightly forward in the stance, and think about sweeping the ball.

The golf swing is a balance between creating a solid foundation and allowing a fluid, natural movement that flows from backswing to forward swing naturally and fully. A common error is to lock the heels to the ground to the point where your body cannot turn through the ball into a nice follow through — often called “hanging back.” At the end of your swing, your thighs will finish very close to each other.

Here is a quick check: there should not be a significant gap between your knees at the end of the swing, and your weight should have shifted to your forward foot, allowing your back foot to rise on the toe.

One reason golf professionals advocate a relaxed swing is that it allows the club to unwind powerfully through the ball, creating that distinctive sound of club head making contact with the ball.

Take relaxed practice rings, concentrating on creating a “whoosh” sound at the bottom of the swing. Stay relaxed, and let the club snap through with authority as it makes the sound. This is one of our simplest golf tips for women, but it will help free up your swing and create more dynamic motion through the ball.

If you’ve ever felt tired and sore at the end of a golf round, you realized how demanding the game really is. Each of these golf tips for women will be more effective if you make some simple preparations beforehand.

The American Council on Exercise suggests you work on two areas of exercise before setting foot on the course. First, focus on flexibility by stretching muscles using exercises such as trunk rotation and leg extensions. Second, employ strength exercises which focus on shoulders, hips, legs and core.

This one-two punch of flexibility and strength will provide better results, allow you to play longer and reduce the potential for injury.

A powerful golf swing results from a buildup of tension as the upper body coils over the lower body as well as the release through the wrists and elbows.

To get a better idea of how the wrist unleashes power, grab a hammer and hold it as if you were about to hit a nail. Notice that if you try to raise and lower the hammer with your arm only, it is difficult to make any progress. On the other hand, if you let your wrist hinge and use the leverage to your advantage, it does not take much effort to pound the nail square into a piece of wood. Likewise, the uncoiling of your wrists and elbows releases the power you stored in your backswing, helping you hit the ball farther and more accurately.

Golf is a great game for improving your health, increasing your focus and mental strength, and enjoying great weather with friends and family. Use these 10 golf tips for women to improve your game and lower your scores.