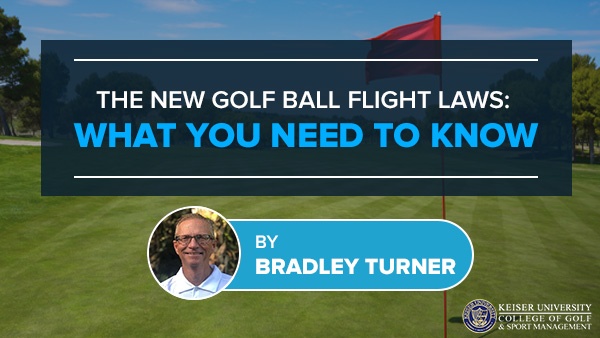 The collision of the golf club against the ball at impact is essentially what Wiren articulated in the PGA Teaching Manual. With the advances in launch monitor technology, such as TrackMan and Flightscope, golf coaches now have access to plenty of additional and complex data to diagnose the ball flight. Trackman measures over 20 parameters of club movement and ball flight characteristics. Even expert golf coaches can get confused with all the data. In this article, I will explain the essentials of what you need to know about the original Golf Ball Flight Laws. Despite the advances in technology, the science of ball flight has never changed. The definitions of each law are derived from the PGA Teaching Manual (1990).

Centeredness – The exactness with which the ball makes contact on the face of the club relative to the percussion point or “sweet spot.”

Speed – The velocity with which the clubhead is traveling.

This is simple. The faster you swing the club, the longer the potential distance you can hit a golf ball. Most golfers are consumed with their clubhead speed, and for golf coaches, it is the one-ball flight law we prefer to stay away from. Clubhead speed is an ally for any golfer, so I do not want to convey that speed isn’t important. Speed can be enhanced with technique and fitness training, but the average golfer should focus on improving their swing relative to the other four-ball flight laws before engaging in maximizing clubhead speed.

Angle of Approach – The angle formed by the descending or ascending arc of the clubhead on the forward swing in relation to the slope of the ground.

Imagine looking at a golf swing from a face on perspective; you, the ball, and the golfer are all in a line. From this perspective, you cannot see the direction the player is aiming, but you can see what Wiren defines as angle of approach. Recent terminology has changed Wiren’s term to the angle of attack. The best ball strikers will have a descending angle of attack on all iron shots when striking a ball resting on the ground. Coaches are always working on improving the angle of attack of average to high handicap golfers. With a seven-iron, low handicap golfers will have an angle of attack of 4 to 5 degrees down prior to striking the ball first and then the ground. The lowest point in the golf swing occurs at least 4 inches after impact. I recall a member many years ago asking me how I could hit my irons so far when I took such large divots. As a 13 handicapper, he was certainly a good golfer, but he could never seem to take a divot and produce effective iron shots. I explained that it was very simple, “Hit the ball first and then the ground!” He looked at me, shocked at this revelation. On his first attempt, he actually struck the ball first and then took a nice divot afterward. The smile on his face was unforgettable. It is astounding how many avid golfers simply do not understand this important Golf Ball Flight Law.

Face – The degree at which the leading edge of the clubface is at a right angle to the swing path.

This is the one Golf Ball Flight Law that needed some additional clarification as there is more to the face than the leading edge at a right angle to the swing path. I prefer to re-define the original definition of the face as the “face plane.” You want the face plane aligned to the intended target. The world we live in is three dimensions, and the face plane of the golf club can move in those three dimensions.

Path – The direction of the arc described by the clubhead in its travel away from and then back toward the target.

This definition sufficiently describes the direction of the club path. However, my experience with students has convinced me that golfers do not understand the importance of path. Ideally, the path of the club will be moving within at least three degrees of the intended target. Assuming you hit a driver 250 yards with a path three degrees to the right of the center of the fairway, the ball will end up 17 yards off line. With most fairway widths, that will put your ball on the edge of the fairway or just in the rough. Of course, this assumes the face plane is at right angles to the path! You can get a general idea of the path of your golf swing by looking at any divot you take from the fairway. The divot should be aligned very close to your intended target.

What Does This Mean for You?

Hitting the ball in the center of the clubface at a high rate of speed should make sense to every golfer. Developing the skill of hitting iron shots with a descending angle of attack will begin to separate you from the high to mid-handicap golfers and put you in the more exclusive club of single-digit golfers. Finally, sharpen a consistent path toward your intended target and build the skill to get the face plane close to right angles to the path, and you will become a very proficient ball striker. Despite the unique golf swings of the best players we watch on television, they all know the secret of the Golf Ball Flight Laws. Now you know too!