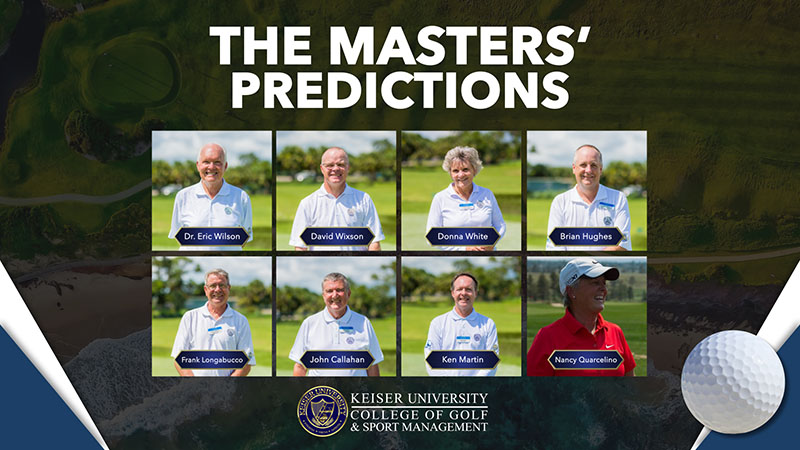 The Masters 2020! Wow, have I been waiting a long time for this one! Normally played in April, this should be a different look and feel at Augusta National. It will be interesting seeing the course at this time of year, and weather conditions promise to be very unique. Also, the new champion will only have the title for less than six months. The “fireside chats” in the Butler cabin will not only be traditional but functional as well – players will most assuredly have layers of outerwear and rain gear. Everyone is talking about Bryson DeChambeau and how his new-found distance will be an advantage. However, it seems that strategy and the short game are the two most notable skills needed to capture the green jacket. Who will win? I’ll quote the great Ben Hogan: “The winner will be the player with the lowest score!” I know that I will be spending copious hours glued to the TV, enjoying the rich tradition known as The Masters!

To steal a phrase from Masters’ announcer extraordinaire Jim Nance, this year, the “tradition unlike any other” will hopefully not evolve into a tradition. The Masters, golf’s annual rite of spring, moves to late fall, without fans, without blooming Azaleas, and without the anticipation normally found with this premier event. Yes, it will be four rounds of a major championship, always a good time for golf nuts like us, but other than that, this year’s event will hopefully be a one-time occurrence, as all of those missing elements are what makes the Masters special. I guess we’ll take what we can get in 2020 and hope for a good competition. The golf course may play longer this year, as it likely will not be as firm as in the spring, enhancing the chances of the game’s longest hitters. Bryson DeChambeau is an obvious favorite with his added length, as is Rory McIlroy. Tiger Woods plays slightly more than I do, so I’m not liking his chances to defend his title, even though it is always great for golf when he contends.  So, in a year of firsts, I’ll predict a first major championship for Tony Finau – he has a good history there, hits it miles, and with the potential for slower greens in the fall, he should putt well enough to put on a 46 long jacket in Masters Green!

The 2020 Masters Tournament is taking place in November this year due to… you know the reason. The good news is that fans of golf will still get to watch The Masters and see Augusta National Golf Club this year.  And then we’ll only have to wait five short months to watch the 2021 Masters next April. There is some bad news, however, and it applies specifically to the players competing in this November Masters; the course will likely play very differently than how it normally plays in April. Although the course will still be green (with no Azaleas in bloom), it will also play much longer than usual due to generally wetter conditions in November compared to April. The temperature should also be much cooler, and the ball will not carry as far. The long hitters will have an even greater advantage than usual. Therefore, I expect Bryson DeChambeau to don the green jacket as the winner of the 2020 Masters. Bryson’s game is made for Augusta National: long drives, high irons, and very good putting works well on that golf course (see Jack Nicklaus, Tiger Woods). Speaking of Tiger, it will be tough for him to defend this year, especially if the temps are chilly, but we’ll see. I’m definitely interested to watch this year’s Masters and will be glued to my television as always. It won’t be quite the same without fans present (no roars), but it is still The Masters!

I love that this tournament will be SO different in November.  The double tees, the weather, the time change, no par 3 tournament, but the “no fans” will really make this a non-event. Yes, it is the Masters.  Yes, I would have liked to be there.  But the fans really make this event what it is – the best. You can’t rule out Tiger Woods to win.  You also must put Bryson DeChambeau in as a potential winner.  But as long as he hits the ball, he may not be able to put the ball where he wants on the greens. They will have to put scoreboards on every hole to make this exciting!

As I reflect on the 2020 Masters Golf Tournament, my thoughts drift toward the condition of the golf course. Since the tournament has been moved to November, I wonder about the speed of the greens, firmness of the fairways, and of course, the potential for some cold weather. Come to think about it, what about the azaleas? The idea of not having fans is hard to fathom. Those roars for amazing shots, the closeness of the fans, and the atmosphere the fans create will all be missing. The entire event will seem…well different. But what about the golf course? Will it be playing firm and fast?  I am looking forward to watching because it will be different. Especially the weather. What will happen if it gets cold and windy? But most importantly, my level of interest is high because I can forget about life for a while and get lost in watching the best golfers on the planet (if they are really from earth?) playing one of the best courses. Who will win? I do not know why I would make a prediction. There are fifty players in the field who could have a great week and put on the Green Jacket. But I predict (guess) Justin Rose will win. Cold weather may favor his game.

Follow the science–all other things being equal, the strongest machine wins. Therefore, Bryson DeChambeau wins the Masters. Caveat: The “all things being equal” predicate includes ‘shots gained putting’ and ‘shots gained scrambling’i equal to the Masters Tournament leaders in those categories from November 12th through the 15th. “A rose by any other name would smell as sweet” (Shakespeare, 1595). An April Masters, in any other month, would look as beautiful (Masters, 2020). As beautiful? Without blooming azaleas, dogwood, and wisteria, I don’t think so. The golf course will always look spectacular, but April at the Masters has that certain “nature’s rebirth quality” that will be missing in November. I usually watch sporting events on TV with the audio turned off. Sportscaster and fan noise distract me from a sport’s essence. No fans—I love it. Now, if there was only a way to mute the sportscasters’ microphones so we could listen to the sounds of nature while we contemplate the struggle of man vs. the golf course—with an occasional picture of the scoreboard. To quote Arnold Palmer, “We can argue about major championships and whether Tiger will ever surpass Jack’s 18 majors, but what can’t be argued is this: Tiger Woods is the most dominant, most skilled player we’ve ever seen.” Anytime Tiger Woods is playing, my interest level is high, and I’m watching.

Hats off to all the professional tours which were able to pivot and reschedule many scheduled Spring 2020 events to later in the year in the wake of COVID-19 to include The Masters, a major hosted by Augusta National Golf Club in Augusta, Georgia.  What will this event look and feel like to both the player and the spectator, and who will win?

The course and setting

Augusta in November. The bent grass greens should be fine as they can tolerate cooler temps, and Augusta has one of the most sophisticated moisture and heat green management systems in the industry.  As far as the fairways, most spectators do not realize the Augusta Bermuda grass fairways have been “over-seeded” with a winter grass (rye) when the tournament is there in
April.  So, while the fairway turf may be a bit thinner and the Bermuda grass dormant, the overseeded rye should sustain through the tournament. Fingers crossed there is not a deep freeze; both greens and fairways should be fine.

The fall/winter backdrop amongst the beautiful layout of this championship course will be much different than years past.  While the pine trees will be green, the pink azaleas and dogwoods will be missing. The dormancy of winter foliage coupled with the silence of having no fans will create a unique atmosphere for the players, as well as the TV audience.  Eliminate the thousands of spectators, empty grandstands, and the thunderous roars reverberating throughout the course… will it feel like a major to the player?

Being eligible to have the opportunity to compete for a green jacket and the title of being a Masters Champion is indeed motivating.  They dream of holding the trophy and being part of the ceremonial ” Green Jacket” club.  Many players have shared just driving onto the property gives them “goosebumps.“  Now, many of the ” external” distractions are silenced and not visible. Coming down the stretch on Sunday, the energy of the bustling crowds, the roars, the claps, the movement of the TV crews, volunteers running to control the crowds, and the smells from the food stands will be gone.

How will this feel and look to the player?  Who will adjust, accept, and adapt to the course setting and has the confidence to own their game during Master’s week? Every player in the field shares that burning desire to win a major; however, my pick is Justin Thomas. I feel he has matured and learned to harness his emotions this past year. Coupled with his ball striking, scoring game, and the fact he now has a major under his belt… go” JT.”...while the course may be in a dormant state, your game and mindset definitely aren’t … go do it!

I am so ready for the Masters this year!  The event has always been the “official” start of the golf season for me and dearly missed this year.  The mid-November start will potentially bring winds from the north, cool temperatures, and softer conditions, all favoring the longest hitters in the field.  However, as always at Augusta, long drives are only the beginning of the challenge.  Thoughtful approach shot plots and deft putting touch are further requisites to cap off a win and gain the spoils that include a new green jacket.  For these reasons, I sense Mr. DeChambeau stands a good chance of being in contention as the leaders make the turn to the back nine on Sunday. His fitness level, scientific approach, and tempered intensity seem an ideal package to successfully negotiate the hallowed grounds at Augusta.  While the import of the Masters remains this year, the richness of experience may be dampened due to the absence of “patrons”.  The resultant echoes from player success or slip create an energy felt by all.  That energy will be missing on the grounds; hence, the player and caddie experience will be different.  Nonetheless, we are fortunate the event will be held, and I eagerly await the opening ceremonial tee shots from Mr. Nicklaus and Mr. Player, and the eventual triumphant donning of the prize.