The Keys to Your Swing

The Keys to Your Swing

The Keys to Your Swing
by Dr. T. J. Tomasi, Keiser University College of Golf Senior Faculty and Director of Research 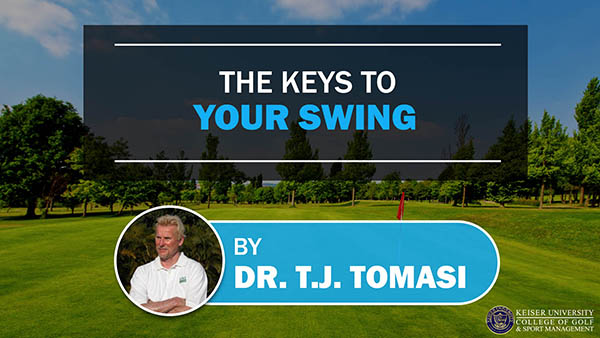 The mental cues used while you play can work wonders, but only if they are well chosen.

These conscious prompts, sometimes called swing keys, give you access to capabilities already stored in your unconscious competence. Dr. Simon Jenkins of Leeds Metropolitan University interviewed 113 European Tour players, asking them about the swing keys they used to play the game.

Jenkins noted that “all these players reported use of swing keys for full shots either on the practice ground and/or on the course.” Jenkins defines a swing key as “conscious thoughts or images that are used by a player just before and/or during the execution of a shot.”

A good example is the use of the cue word “process” used by Rory McIlroy before every shot to win the 2014 British Open.

It reminded him to go through his shot routine step-by-step.

Too many players get on a good run, then overplay their hand because they feel invincible and can’t be bothered to take care of routine business.

Please remember this: “Nobody is good enough to ignore the fundamentals.”

If you go back to your best golf, you’ll see that you gave yourself the gift of time – you weren’t slow, just inexorable.

But swing keys are not limited to the verbal; auditory and kinesthetic keys are also triggers that activate previously learned capabilities.

Swing keys perform another valuable function that often goes unmentioned: They serve as prompts that assure your brain everything is OK.

When you’re playing well, of course, everything is OK; therefore, the number of prompts you need to stabilize or protect your swing motion is minimal. Jenkins makes this interesting point: “It could be argued that the state of having a minimal number of swing keys is a consequence, rather than an antecedent, of successful performance.

The use of swing keys is a dynamic process, which can change on a daily basis and depends very much on a player’s recent tournament performance and what he/she has been working on in his/her swing.”

Swing keys help you to do what you already know how to do – anything else is tinkering.

As far as your personal choice of swings keys, they should come from your current swing and should be a procedure that insures that the keys represent capabilities already in-house – the last thing you want to do under pressure is to introduce a new, unpracticed, swing thought.

And the closer to address the key is, the better. Here’s how to differentiate good from bad swings keys.

There are two types of keys: active and passive. An active swing key tells you to initiate a new move or motion.

For example, “roll the forearms through the ball,” or “fire your right knee toward the target.” In contrast, a passive swing key tells you to maintain a position or continue a motion.

“Maintain your spine angle” would be an example of a passive key.

As a rule, the later in the swing you use an active key, the higher the risk that you will misapply it – and when it’s too close to impact, you can’t react in time.

Note that the average downswing takes about half a second – for a good player its .33sec – while it takes close to a second to process and react on time to a conscious command.

Thus, for most golfers, the latest point where you can effectively use an active key is in the transition zone between backswing and downswing. Here a key like “plant the left heel” can be very helpful.

The rule of thumb: Whenever possible, choose address and backswing orientated keys.

Downswing action keys may work occasionally, but because they are difficult to time correctly, they are more likely to produce a choppy, error-prone swing that results in inconsistent performances.

If you need a swing key during the downswing, make sure it’s passive; i.e., one that tells you to hold a position or continue a motion.

For example, “keep the right heel down until it’s pulled off the ground” gives your swing an opportunity to unfold around a central theme established before you begin your downswing.

*Please note that in the above advice I am referring to playing keys, which can differ from practice keys.

It’s OK to use downswing action keys while working on a particular part of your swing on the practice tee, preferably under the supervision of your teacher.

But once you’re finished practicing, don’t forget to put Humpty Dumpty back together again.

If you enjoyed this golf tip, here’s how you can get even more. Contact Keiser University College of Golf about a golf degree.