The Emotions of the Ryder Cup

The Emotions of the Ryder Cup 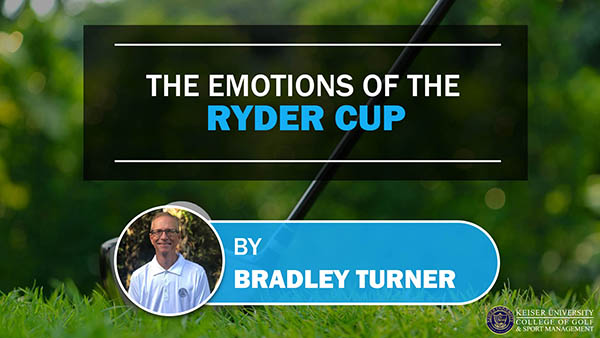 After three days of non-stop Ryder Cup action, there are a number of takeaways that lead me to the conclusion that this is the best event for not only golf fans but for the world’s best players. For starters, the pressure on the American team to bring the Cup back to home soil was immense. The overall atmosphere of the Ryder Cup competition with the partisan Wisconsin fan base helped to flame the emotions on both teams. The players were not playing for an enormous purse as they usually do in a PGA or European Tour event, but rather playing exclusively for pride, their teammates, and supporting fan base. That is a bit unusual, to say the least.

Finally, even Brooks Koepka and Bryson DeChambeau appear to have buried the hatchet on their season-long feud. The Ryder Cup is magical for all involved and one of my items on the ole bucket list! I plan to experience this event in 2023, when the European team will host the best event in golf in Rome, Italy.

The Pressure on the Home Team

With the American team enjoying only two Ryder Cup victories since the miraculous comeback at the Country Club of Brookline in 1999, the pressure on Team USA was enormous. A recent record of 3-9 since 1995 was dismal enough for even a casual golf fan to wonder what was wrong with the American team. The PGA of America made a strategic decision to select Wisconsin’s own favorite golfer, Steve Stricker, to Captain the team in his home state. I can only imagine the pressure in the team room Thursday evening, before the first match.

The spectrum of emotions was going to be as far apart as anything the players had ever experienced. For their leader, Captain Stricker, the joy of winning the Ryder Cup in front of his supporting fan base, his home state, and the 25 million American golfers was unimaginable. If he lost the Cup, the emotions of a loss would be inconceivable. By Sunday evening, the American team would be crying with satisfaction or crying over another disappointing defeat.

As for the European team, led by Captain Padraig Harrington, the pressure was much different. The American squad was stronger on paper. Europe was the away team playing against a somewhat hostile crowd. Europe was expected to lose this Ryder Cup. Winning on foreign soil is something the American team has not done since 1993. The European team has won in America in 1995, 2004, and 2012.

Surely, the expectations of the team were measured with the hope of some outstanding performances by their lead horses, Rory McIlroy and Jon Rahm. Add a few additional wins from the rookies Shane Lowry, Victor Hovland, and Bernd Wiesberger, and the Europeans had an outside shot at retaining the Cup. The Europeans had very little to lose, while the Americans could not afford to lose another one!

I have been a spectator on the first tee at the Masters. I was on the first tee when John Daly teed off in the final round of the PGA Championship at Crooked Stick. I have also watched Tiger a few times tee it up at the Arnold Palmer Invitational. All PGA tournament sites are a bit unique yet somewhat similar in the spectator experience. There is nothing on the PGA tour that compares to the first tee at a Ryder Cup.

The home team has a clear advantage with the crowds wildly supporting them while the visitors have to contend with chants supporting the home team. The Wisconsin crowd was respectful to the European team but trying their best to challenge their mental toughness. Sergio Garcia was the first to play on Friday morning, and as expected, the veteran of numerous Ryder Cup experiences went through his routine (with a few noticeable extra deep breaths) and hit a reasonable drive but found the left fairway bunker.

In the next group, Ian Poulter was wearing a Whoop monitor that measures various physical human functions, including the heart rate. His heart rate was displayed for viewers to see, and as Poulter was taking his practice swings, the monitor was reading about 112 beats per minute. As he stepped into his set up position, his heart spiked to 138 beats per minute. Ian was feeling it. Once again, as a world-class player, he hit a solid drive that found the first cut of rough, setting up his partner for an easy pitch shot. Rory promptly chunks the 48-yard shot, leaving Poulter with a 30-foot putt for birdie. Rory’s bad day had just begun, and with it, the hopes of the European team.

It’s About the Team

A professional golfer is singularly focused on their ability to beat the 155 other players in any given golf tournament. This self-absorbing mindset is a requirement of a world-class player. A golfer is playing primarily against the golf course, equipped with their own unique skills that they developed over many years. In tournament competition, the ability for a player to ignore a fellow competitor’s performance and stay focused on their own can separate the best players from the rest of the players.

The European team has been able to shed the individuality of the game and come together for the greater good. It has been difficult for the American side to figure out their secret ever since their Ryder Cup victory in 1985. But this year, the American team appeared to be unified with 12 teammates instead of 12 individuals. What else could bring about an end to the season-long saga between DeChambeau and Koepka other than being on a winning Ryder Cup team?

Even adversaries can come together if the cause is aligned, and they must function together as a team. There is no “I” in team, so the saying goes, and Captain Stricker managed to broker a cease-fire between Bryson and Brooks. A good teammate puts the team before the individual. The American team clearly embraced this mentality, including Brooks and Bryson.

In the victory ceremony, the team chanted for a celebratory hug between the two, to which they both agreed. The hug may not have been the warmest embrace, but to see both of them smiling along with a cheering USA Team sums up the spirit of the Ryder Cup. Yes, winning as a team is much better, as the players can share the victory, not as individuals but as a team.

The Emotions of Rory McIlroy

Through the first two days of competition, Rory McIlroy was unable to earn a point for his team. The most decorated player on the European team shouldered high expectations if the Cup was going to stay in Europe. All golfers will go through the peaks and valleys that are inherent in this incredibly difficult sport. Unfortunately, Rory’s valley showed up on the biggest stage in golf. He is known as one of the best drivers of the golf ball on the planet. In the opening foursome match, he hit only 2 of 6 fairways, leaving his partner Ian Poulter with some difficult approach shots. He made only one putt in the morning, a 3-footer for birdie on the 10th.

The afternoon fourball match was not any different. He missed the green on the 9th hole from 120 yards away and made a bogey. On the short par 3 twelfth, he hit the worst shot of all 16 players Friday afternoon. Only a gap wedge or sand wedge straight downwind, Rory dumps it in the front bunker, 48 feet shy of the flagstick. Three players hit it inside one foot. Four more were inside 10 feet. He was the only player in that bunker all week. Captain Harrington decided to sit his big gun on Saturday morning, which surprised the golf pundits. Harrington hoped for a good showing on Saturday afternoon, but to no avail for Rory…0-3 through the first two days. Europe was on life support, and the one player that was expected to contribute the most to the team was shut out.

Nothing epitomizes the Ryder Cup more than the interview with Rory after his singles match victory on Sunday. His heartfelt and tearful interview said it all, it is about the team, not the individual. Rory’s emotional interview was noted as surprising by many, but not to those that have been on a united and hardworking team. Rory said, “I love being a part of this team…I love my teammates so much, and I should’ve done more for them this week. It is by far the best experience in golf, and I hope the boys and girls watching this today aspire to play in this event, or the Solheim Cup because there’s nothing better than being a part of a team, especially with the bond we have in Europe.”

Rory has come a long way from his initial thoughts on the Ryder Cup when in 2009, he said, “The Ryder Cup is a great spectacle but an exhibition at the end of the day, and it should be enjoyed. In the big scheme of things, it’s not that important to me.”

But in defense of his comments, he just had never experienced being on a Ryder Cup team. His perspective has certainly changed over the past decade. The team aspect provides for an emotional encounter that professional golfers do not experience.

With that emotion, avid golfers get to enjoy watching the world’s best players competing for a piece of hardware instead of a $10,000,000 purse. In 2023, look for me in the stands on the first tee on Friday foursome matches, as I will enjoy the experience of a lifetime and feel the emotions of another Ryder Cup.