Should You Change Your Putting Grip

Should You Change Your Putting Grip 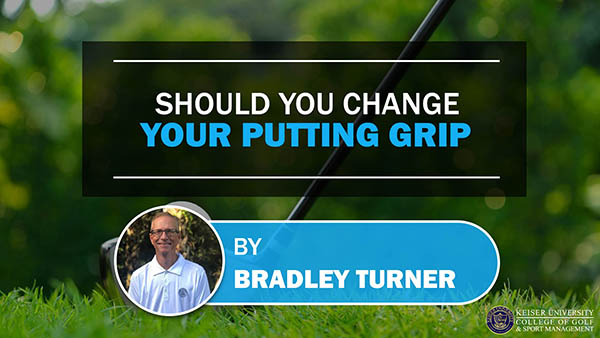 The search for the magic potion on the putting green will probably never cease for the competitive or addicted golfer. A seemingly easy task like putting can become confounding and frustrating. In extreme cases, golfers can get to the point of quitting the game. Before you make any rash decisions on the future of your golf game, take a pragmatic look at your putting issues. In most cases, a few minor changes can make a world of difference the next time you go out to play. These changes are based on the science of motor skill learning and are real solutions to your putting problems!

For Most Golfers – You Don’t Need to Change

The majority of golfers need to spend more time on the practice putting green. If you are an occasional golfer, then making frequent changes to your putting will only serve to confuse you further. Unfortunately, the magic in putting is found by doing the work necessary to become a skilled putter. A new putter or putting stance will not give you the skills to lag a putt from 50 feet or to make the downhill four-foot putt. If you are a golfer who has enjoyed some good days putting, I suggest taking some extra time each week to practice this skill. Getting some help from an experienced putting coach is a good idea and will most likely put you back on the path to better putting. The chances are that an adjustment in your setup position, ball position, or alignment is the root cause of your putting troubles. However, if you are a frequent golfer who has really struggled with putting performance in competition or friendly matches, then you should think of making some changes that will free your mind from the negativity you associate with putting.

Ben Hogan, Sam Snead, and Arnold Palmer are a shortlist of Hall of Fame professionals who were great putters early in their career yet struggled later on to make even the shortest of putts. Ben Hogan could hit a golf ball consistently to the middle of the green from 200 yards, yet he could miss the entire hole from just three feet. How does this happen? According to Walden University professor Dr. Deborah Weatherspoon,

“Focal dystonia is a rare condition, which people sometimes refer to as ‘the yips.’ It is a neurological disorder that involves involuntary spasms in small muscles in the body. It can result from overuse or repetitive stress and tends to affect musicians and golfers.”

If your putting has digressed to the point of very low confidence and bordering on an affliction with the yips, you must do something about it. The messages from your brain to the muscles to perform the motor skill must be altered. Without making any changes, the neural pathway signals will continue to send the “yip” message or “miss” message resulting in involuntary muscle movement through impact. According to the Mayo Clinic, ‘because the yips may be related to overuse of specific muscles, a change of technique or equipment may help.’ The Mayo Clinic suggests that changes in the grip and technique of equipment can create a new neural pathway that can make a positive change in your putting.

The first suggestion and most cost-effective change is to try a new way of holding the putter. When you change the way your hands are placed on the putter, the associated muscles used to putt will change as well. This requires that the brain figure out how to move the putter with this new grip. The brain will begin constructing a new neural pathway to send the “putting stroke” signal to the appropriate muscle groups. The old neural pathway is altered, and with that change, the brain can sometimes be freed up for the golfer to make a more confident putting stroke.

The interesting aspect of teaching the full swing grip is that most golf coaches agree on a universally accepted way to hold the golf club. For the golfer to hit the ball with good club head speed and clubface control, the hands must be on the club in an appropriate manner. There are slight variances to the traditional full swing grip, but most good golfers have a reasonably sound full swing grip. However, in putting, there is a wide spectrum of putting grips used by the best players in the world. The main reason this is possible is that putting does not require high club head speed.

Essentially, a good putting grip allows the player to control the clubface and send the ball rolling on the intended line. Here are six possible putting grips to try:

If you have been consistently struggling on the putting green, then a change is necessary. By experimenting with the suggested putting grips, chances are you will find one that you prefer. If you decide to change your equipment and purchase a new putter, then you really have a chance to make some positive changes. Remember, the science of motor skill development supports this idea of change! But to make permanent changes with the positive results you are seeking; you will have to practice. The magic potion in putting is the belief in your ability to make putts! When you make putts in practice, you begin to build lasting confidence that will carry you through your next big competition. That downhill four-footer will become a piece of cake!

END_OF_DOCUMENT_TOKEN_TO_BE_REPLACED

How to Practice on Your Couch