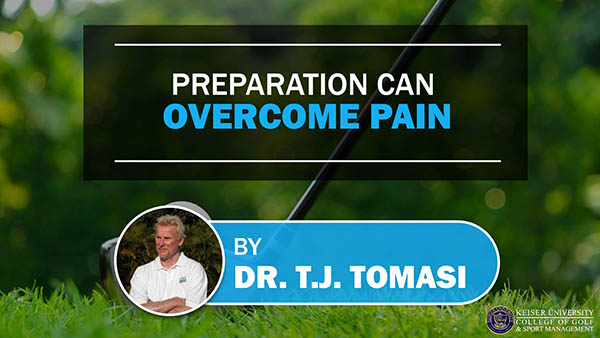 The game of golf is the ultimate persistence test because each shot requires sequential problem-solving. Research shows that unless properly trained, your brain’s ability to resolve sequential problems ebbs when it comes to performing a series of related tasks — such as a round of golf.

People who successfully accomplish tasks requiring this kind of problem-solving are experts at using Directed Mental Focus (DMF) as the round progresses. Why is DMF so difficult to maintain? It may be as simple as a drop in blood sugar. You can last only a few minutes without brain fuel, and the first thing that goes is your ability to focus. You’re not going to starve during a round of golf, but small changes in concentrations of blood sugar can disrupt planning and self-control. This is why golfers in the know, like Tiger Woods, munch on bananas, nuts, and energy bars — especially over the last few holes.

Another sapper of DMF is dehydration, a difficult body state to treat because the initial symptoms — slight unsteadiness and intermittent blurry vision — often go unrecognized and therefore unattended. You may not faint or forget what you’re doing, but the small mental aberrations caused by dehydration are enough to turn your fade into a slice. Talking to my players after a competition, I have realized that it’s common for players to hit the ball fat late in a round because their near-sight is affected by failure to hydrate. They can’t tell visually where the back of the ball begins, and the ground stops. These and other effects of dehydration are magnified in older golfers, especially those over 65, who take medicines such as diuretics that lower the body’s fluid content. Assuming you recognize and attend to the easy interventions, i.e., eating and hydrating while you play, there is another way you can maintain your direct focus — practice.

Ben Hogan, the ultimate intervener, was famous for practicing with the purpose of becoming tired so he could work on keeping his focus while exhausted. He developed the specialized mental skill DMF to protect against the failure that lapses in focus can cause during the heat of competition. This skill is one reason he made his remarkable recovery from a devastating car crash in 1949 that smashed his legs and pelvis so severely that his doctors advised he might never walk again. Sixteen months later, Hogan trudged five rounds in searing, focus-breaking pain, surviving an 18-hole playoff to win the U.S. Open – a feat dubbed “the Miracle at Merion.” But it was no miracle because Hogan had prepared his mind to insulate himself from all distractions, even in the form of mind-numbing pain and sheer exhaustion.

END_OF_DOCUMENT_TOKEN_TO_BE_REPLACED

Match Your Strategy to Your Current Performance