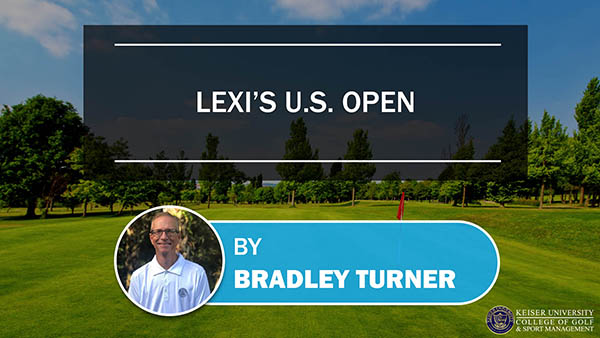 I have always enjoyed watching the best athletes in their respective sports perform on the biggest stage. There is no bigger stage for women’s golf than the United States Open Championship known as the U.S. Open. This past weekend, I made sure to spend some time watching the world’s best try and tackle the Olympic Club in San Francisco. The Olympic Club is an amazing golf course that is built on the side of a hill. There is only one fairway bunker on the course. There is no need for more fairway bunkers as the sloped fairways, U.S. Open rough, green complexes, and enormous Monterrey Pine trees ferociously defended the course from scores under par.

Olympic Club is also the site of historic U.S. Open collapses by some of the greats of the game. Arnold Palmer held a seven-shot lead standing on the 10th tee on Sunday of the 1966 U.S. Open and lost in a playoff to Billy Casper the next day. Tom Watson held the lead in the 1987 U.S. Open on the 10th tee and did not win. The same thing happened to Payne Stewart in 1998 and Jim Furyk in 2012. They each held the lead on the 10th tee and could not close with a victory. Maybe it all started in 1955 when an unknown club professional from Iowa beat the great Ben Hogan. Jack Fleck birdied the 72nd hole to force an 18-hole playoff the next day. Virtually all the golf pundits wrote that he had no chance to beat Hogan in a playoff, yet he shot a 69 to win the championship. Olympic Club has not been kind to some of golf’s hall of fame players.

As I tuned into the broadcast, Lexi Thompson, at one point, held a five-stroke lead on the front nine and was eight under par and held a four-stroke lead as she stood on the 10th tee. Lexi is one of the really good players today, but to ascend into the category of great players, she must win the major titles. With one major win in her career, she has proven that she can get the job done. It was going to be fun watching her win her first U.S. Open. Except that it wasn’t fun as she did not win, and she will now be forever included with some of the greats of the game that were unable to conquer the challenge of the U.S. Open at Olympic Club.

The Chink in the Armor

After a routine par on 10, Lexi found the rough off the tee and gouged a wedge short of the green on the 11th hole. The ball was in the fairway approximately 20 yards short of the green, with the pin located another 20 paces from the front edge of the green. This distance from the hole is a bread and butter shot for a world-class player. As she prepared to play the simple pitch shot, it was clear that she was uncomfortable. It took her approximately two minutes to hit the shot when the pace of play guidelines expect a player to hit the shot in only 30-45 seconds. And when she finally hit the pitch shot, she hit it fat, and the ball did not even make the putting surface. Why she took so long is unknown, but what is known is the following observations of the chunked pitch shot that put a chink in her championship armor.

Lexi’s lead had dropped to two from an earlier lead of five on the front nine. She seemed calm on the outside, but what was happening on the inside is known only to her. As she continued to fight through the remaining seven holes, her short game and putting held her back. On the 14th hole, she had another seemingly easy pitch shot from the light rough. She mis-hit that one too and made bogey, dropping the lead to only one stroke. She could not convert on a couple of good birdie putts on 13 and 16, putts that could have stopped the bleeding. When she ended up 10 yards short of the green on the 17th hole and decided to putt the ball, it was clear the chink was a gash in her armor. I was hoping for a miracle lag putt from that far off the green, but it was another bogey, and the lead was gone. A final bogey on 18, and she closed with a five over par 40 on the back nine, one shot from the playoff.

I am certain that Lexi could have hit 10 of 10 pitch shots within 15 feet of the hole on a Tuesday afternoon. But when a player becomes too careful, too precise, when the prevent defense is on well, we all know what to expect, a slow and emotionally painful march away from victory. A sign of uncertainty in an athlete is when they begin to ask too many questions in the heat of a competition with the hopes of creating certainty. Too many questions with too many answers lead to too much doubt. Thinking of how to execute the golf shot under pressure will not create the efficient subconscious performance that top-tier athletes demonstrate. When under pressure, instead of seeking data and verbal information to create certainty, they seek powerful images.

In Dr. T.J. Tomasi’s book, The 30-Second Golf Swing, he writes, “Much of the brain’s energy is devoted to producing imagery, and since your brain only allocates its resources to important matters, imagery must be a high-powered tool in human performance – a power you must harness to run your brain.” Imagery under pressure is vital. Jack Nicklaus has written extensively on this subject. The ability to hyper-focus under extreme pressure is one of the great attributes of Tiger Woods. Imagery and focus on the desired outcome is a trait of many great athletes. A good takeaway from this U.S. Open is the power of the mind and the influence it has on deciding the champion. More information is not always better for performance. Great images are powerful allies to your success under pressure.

As for Lexi Thompson, she can include herself with some of the all-time greats. And just like those that have not won at Olympic Club, she will learn from this defeat and become a better player in the future. She is just too talented to allow this to change her future. I believe she can be like Payne Stewart after losing the U.S. Open in 1998 – come back the next year and win it.