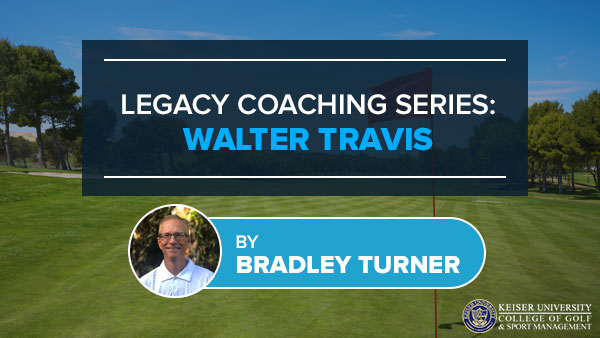 Over the next few months, I will look at historic players and golf instructors who have influenced the teaching ideas in their era and how those ideas are relevant today. In this Legacy Coaching Series, I will discuss a specific golf shot, remedy, or method of swinging a golf club. This will be a fun, informative, and historical look at those that have impacted the direction of golf learning and teaching.

For any avid golfer who started the game later in life, the story of Walter Travis is one worth reading. Travis was a good athlete as a young man but thought golf was not the game for him. In the fall of 1896, he bought a set of clubs at the age of 35 and decided to try the game. Without the help of a golf instructor, Travis set out to read and study the golf books available to him. He believed that if you were going to play a sport, you should learn to play it well. During the winter of 1896-1897, he studied the game and began developing his own golf swing. Travis spent most of the summer of 1897 practicing his form and experimenting with the cause and effect of various striking actions. Once he felt certain of his homemade swing, he tested it on the golf course and subsequent tournament competitions.

In 1900, after only four years of playing the game, Travis won the U.S. Amateur Championship. He won again the following year in 1901 and 1903. Travis crossed the Atlantic to play in the British Amateur a year later and became the first foreigner to win that coveted championship in 1904. Travis wrote about his own understanding of the game in a book titled Practical Golf, which he penned in 1901. There is much to learn from the champion golfer’s book, and we will focus on two important ideas that he wrote about that continue to be a challenge for the average golfer of today.

It is amazing how many golfers do not understand this very important concept in striking a golf ball. Virtually all low handicap golfers understand the importance of angle of attack, yet it is hidden from the sight and mind of less skilled golfers. To become a proficient ball striker, the golfer must hit the ball first and then the ground. This is not a difficult concept to understand and implement in any golf swing. Unfortunately, this message, which has been around prior to the days of Walter Travis, is still unknown to the majority of golfers. In his book Practical Golf, Travis clearly describes the importance of a proper angle of attack.

“Aim to hit the ball in its centre with the middle of the face, and let the club go through and slightly into the ground…Be very particular not to take any turf until after the ball is hit. The ball must be hit clean, and the club allowed to go through into the ground immediately after, and not on any account before, reaching the ball.”

“With poor lies…don’t try to get the ball up; the lofted face of the club will do that; rather go to the other extreme and make up your mind you are going to drive it into the bowels of the earth. It is astonishing how far a ball can be shot out of what looks like an impossible lie by these means.”

Despite the massive improvement in technology and the overall level of knowledge and understanding of the golf swing, today’s instructors continue to work through the challenges of angle of attack. The mystery of a clean strike has been known for centuries, yet the average golfer still does not comprehend the importance of the proper technique in hitting a basic iron shot. Golf coaches still must reveal the simplicity of this ancient secret every day on the lesson tee.

For some reason, new golfers sense the need for using the most lofted club in the bag to hit a short approach shot to the green. If a ball is five yards from the green, the less experienced golfer will choose more loft instead of less loft. There are some circumstances when loft is absolutely necessary, but I am always teaching students to use the least amount of loft possible to hit a short game approach shot. Walter Travis explains this concept perfectly:

“If there should be no rank grass but simply the ordinary fair green, free from any bunkers, a running up approach may safely be played with the putter. It is imperative, however, to bear in mind that the stroke should be different in kind from the ordinary putt. You should aim to hit the ball as if it were your intention to drive it into the ground, standing rather more than usual in front, and striking the ball with the face of the club slightly turned in…A stroke of this kind may be played even fifty or sixty yards from the hole, and with far more certainty of result than if a mashie had been used.”

“The simpler the means employed to get the ball into the hole the better. It is much easier, and less fraught with danger or risk of failure, to run a ball up than to pitch it. If pitching were easier, why not putt with a mashie? Never use a mashie or any heavily lofted iron when the necessity for pitching does not really exist.”

We don’t see golfers using a putter from fifty yards in 2021. But, if the conditions are dry and firm, many golfers would have more success using a putter, as described by Walter Travis. I have demonstrated this approach shot with a putter many times for my students. I would usually putt from about 10 yards from the edge of the putting green, and the student reaction was that of confused amazement. Most of my students had never even tried such a golf shot, so it appeared to be difficult in their minds. However, after giving the shot a few tries, they soon realized it was not such a difficult shot after all.

Learning to strike the ball first and then the ground is the most important concept for any golfer. Remember, all the great historic players, regardless of age or gender, have been able to execute shots exactly how Walter Travis described. And throughout history, many of them learned to do this without video, launch monitors, and full-time golf coaches. The wisdom of the Old Man is relevant as much in 2021 as it was 120 years ago!