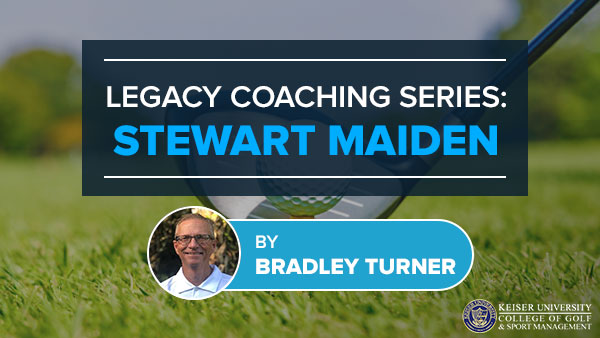 Performance coaching in golf has become more available to the golfing public over the past few decades. Individuals educated in the psychology of sports performance have slowly infiltrated their way onto the professional tours and the minds of the everyday golfer. There must be a reason that many of the top players have a golf swing coach, a putting coach, a fitness guru, and a sports psychologist. For the best players in the world earning millions of dollars on the PGA Tour, it makes good sense to have specialists available to help them in specific areas. This holistic approach to golf performance is much different than the teaching and coaching golfers received prior to 2000. As video analysis became more readily available to golf instructors, many top teachers wanted their students to look like the model golf swing, believing that swinging like Nick Faldo or Greg Norman would produce championship golfers. Many successful PGA Tour players attempted to take their game to the next level by changing their golf swings to fit the approved model and subsequently found themselves off the Tour.

Fortunately, we know so much more about the golf swing and overall sport performance than in the 1990s. It is now clear to experienced golf coaches that swinging like Adam Scott does not make a player Adam Scott. A new breed of golf coach is emerging that combines the fundamental knowledge of ball striking with the mental edge needed to perform under pressure. Collin Morikawa’s golf coach, Rick Sessinghaus, is a great example of performance coaching. Rick is a PGA professional with a doctorate in sport psychology. This new concept of “golf swing and performance” has actually been around since the game was first played in America prior to 1900. One of the first really great golf performance coaches was Stewart Maiden.

Maiden came from Scotland in 1908 to East Lake Country Club in Atlanta, Georgia, to teach the game to golf-crazed Americans. A serendipitous meeting of the teacher and pupils occurred at East Lake when Maiden took a couple of young golfers under his wing. Undoubtedly, the greatest amateur golfer to ever play the game, Bobby Jones was a young junior golfer at East Lake Country Club and learned to play with the help of Maiden. Before Bobby Jones won his first major championship, Maiden was quietly working with one of the great female amateur golfers ever to play the game. Alexa Stirling won the US Women’s Amateur in 1916, 1919, and 1920.  With the first World War canceling the championships in 1917 and 1918, she essentially won three consecutive major championships before the nation learned of Bobby Jones. What was the Stewart Maiden coaching philosophy that molded two young junior golfers into national champions?

Uncovering Maiden’s teaching beliefs can be discovered through the words of Bobby Jones himself. In those days, golf professionals would take their clients out on the golf course and teach them how to play golf. Since practice ranges were rare, the idea of practice on the range to improve the golf swing just did not exist. Without the technology available today, it was difficult to study what really happened in the golf swing. The flight of the ball provided teachers and students with the feedback needed to learn and develop. Therefore, much of Maiden’s teaching would focus on how to play various golf shots, curving the golf ball, changing flight trajectories, and focusing on where to send the golf ball. Bobby Jones was a believer in the importance of rhythm and tempo in a properly timed golf swing, especially in tournament play, a reflection of Maiden’s insistence that there was no perfect golf swing. As Jones’s only mentor, it is appropriate to surmise that Maiden’s teaching was rarely on swing mechanics but getting a student to hit golf shots. There is a difference.  Bobby Jones wrote:

Paralysis by analysis can happen to anyone. It happens when we get caught up in thinking about how we want to hit it, instead of where. It’s when, instead of picking a target and taking dead aim at it, we stand up to a shot thinking about keeping our left arm straight, or keeping our head down, or whatever other tip, or idea, we’ve latched on to. Paralysis by analysis; it’s been the ruin of many a man’s game.

Jones also understood the essentials of impact. Today, we call this the Ball Flight Laws that describe the ideal conditions of the club upon contact with the golf ball. Once again, it is evident that Maiden taught his students to swing the club toward their objective (the target), strike the ball first and then the ground, hit the ball in the center of the club face with it aligned to the target, and swing the club at a maximum controllable speed. This understanding is a must if a player is going to develop into a competent ball striker. How this is accomplished was not a concern to Maiden, who believed there were plenty of different golf swings that produced champion golfers. That fact remains the same in 2022!

Finally, Jones described the essential motion of the body or what we call the pivot. He wrote of the importance of shifting the pressure to the lead foot with the hips rotating prior to impact. Maiden thought that a good pivot was one of the most important aspects in building a powerful and repetitive swing. It is difficult for golfers of today to comprehend that the “secrets” to the game have been around for over 100 years!  A good pivot with proper club movement through the golf ball is about as concise as you can get in developing sound ball striking skills.

Rick Sessinghaus is a modern-day Stewart Maiden with a deeper understanding of the technical aspects of swinging a golf club and the knowledge to improve the competitive performance of his students. Hopefully, the days of swinging like Ben Hogan, Jack Nicklaus, or Tiger Woods are coming to a close.  Understanding what these great players did in common is what students must comprehend. The commonality of the best players’ golf swings will align with the core beliefs of Bobby Jones’s mentor. We need a few more performance golf coaches instead of the swing gurus, much like the great Stewart Maiden.