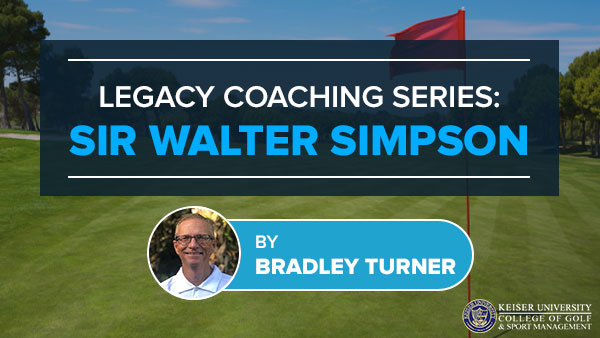 The Art of Golf was written in 1887 by an avid amateur by the name of Sir Walter Simpson. Simpson discovered the game of golf later in life and quickly became enamored with it, and eventually became a Captain of the Honourable Company of Edinburgh Golfers. The book is a wonderful read as it takes you back to the days of Old Tom Morris and describes the nature of the game and the challenges that face every golfer. It is very interesting to read that the emotions, thoughts, and frustrations of the game seem to be essentially the same as in 2022! Sir Walter Simpson was not a professional instructor, but it does appear that he had a keen eye for the game and observed the differences between a “first-rate golfer” and a “second-rate golfer.” Here are a few of my favorite takeaways from the Art of Golf.

In the Preface of the Art of Golf, Sir Walter comments on the illustrations in the book. He wanted to show pictures of the golf swing using a new technology, instantaneous photography. It is believed that this book is the first with photographs of golfers’ swings, including that of the great Old Tom Morris. There were three photographs of Old Tom Morris; at the top of the backswing, transition to the forward swing, and the completion of the swing. When you analyze the first two photographs, it is easy to see why he won four Open Championships.

There have been many advances in the game of golf since 1887, most notably the change in golf clubs and golf ball technology. From a teaching perspective, we understand so much more about the golf swing and the science of ball striking than a century ago. However, there are many aspects of the game that have not changed, and one is that golfers continue to scoop the ball at impact. When a player scoops the ball, their intent is to get under the ball and help it into the air. Today, many golfers are like their golfing ancestors from 1887 and do not understand the correct concepts of impact. Golfers have for centuries made this debilitating mistake, and unfortunately, golfers are making the same mistake in 2022. Sir Walter Simpson writes:

“…almost universal with tyros (beginners) is to attempt to scoop the ball up into the air. Nothing is more common than to see the face of the club of the iron shot, held up as if for alms, whilst the ball is trundling along the ground. Let the golfer ever remember that it is the lie of the club, not the turn of the wrist, which is responsible for loft.”

I will paraphrase by saying, let the club do the work. Just hit the back of the ball; that is the golfer’s task.  As for getting the ball into the air, that is the job of the club loft. Some things just don’t change.

Good Within a 100 Yard Radius

As an advocate of the short game, it was with great pleasure to read the thoughts from Sir Walter on the seemingly simple task of getting a ball on the green from within 100 yards and into the cup in three strokes. I have been fortunate to play with some great professional golfers over my career, and all of them are able to handle this task very well. A player with a good game from 100 yards and in will always be a good player. I have never met a single golfer that could putt, chip, pitch, and wedge the ball and be a poor golfer. It just does not exist in golf.

“Judged by his apparent merits, the most dangerous man is he who is exceptionally good within the hundred-yard radius…If you are puzzled at so-and-so constantly winning, the key to the enigma will probably be found in the inconspicuous regularity with which he performs the apparently simple duty of holing in three (from inside 100 yards.

If I could teach you four things this year, you are guaranteed to be a better player at the end of the year.

There is so much more in the Art of Golf, and for historians of the game, it is a must-read. Although the game has changed due to technology, the essence of the game has not. Sir Walter Simpson’s thoughts on the art of golf can be an inspiration to golfers today. Our golf ancestors suffered the same emotional challenges and frustrations we do. But I am also certain they loved the game, as much as we do too!