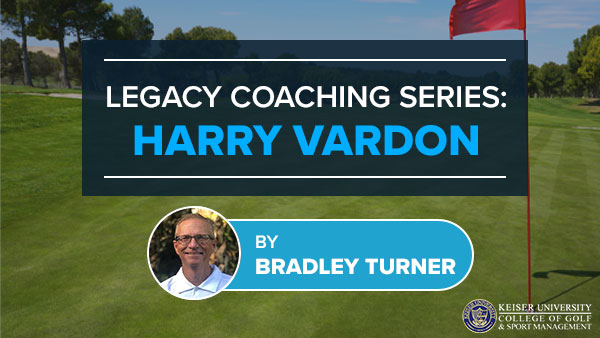 In the second article of the Legacy Coaching Series, I will share some interesting thoughts on putting from the great Harry Vardon. Vardon was the star golfer of his era, and his name is still used today to describe and demonstrate the “Vardon Grip,” the most popular way of holding a golf club. Also, the PGA Tour player with the lowest scoring average is awarded the Vardon Trophy. The Vardon name has not been forgotten, but some of his thoughts on the game have been lost over the past century. Much of his understanding of the game is captured in his writings and is relevant today. Vardon wrote a book titled Progressive Golf, and he starts the book from the hole back, meaning putting in the first chapter and driving the ball in the last chapter. The wonderful benefit for golfers today is the ability to get inside the mind of one of the all-time great golfers and read about his perspective on the game of golf.

Vardon is the only six-time winner of the British Open Championship, and by the turn of the century, he was the most popular golfer in the world. He won his first British Open in 1896 and followed it up with consecutive victories in 1898 and 1899. In 1900, America had the chance to see Harry Vardon as he competed in challenge matches throughout the country. Vardon lost only one of the 88 matches over the summer of 1900, all leading up to the US Open. The championship was held in October at the Chicago Golf Club, and Vardon proved to America and the golfing world that he was the most accomplished golfer of the day, winning his first US Open. He only competed in two more US Opens in his career, finishing second both times in 1913 and 1920. One of his greatest skills in the game early in his career ended up being his demise later in his career, the ability to make short putts under pressure. In his book Progressive Golf, Vardon shares his key thoughts on putting.

Vardon describes his own putting style for the reader, but it is clear that he thought putting style was as unique as each individual. Golfers must discover their own natural putting technique. He believed that of all the skills in golf, putting is more of an art than a science. The first sentence in his book captures his belief in putting.

“I am not sure that there is any golden rule for achieving success on the putting green. A few well-defined principles there are that seem to have logic on their side, but they are only part of the constitution of that dispensation which we call deadly putting.”

Vardon witnessed many different putting techniques in his time but thought the science of putting could be trumped by the ability to read a green correctly and hit a putt at the right speed. Holing putts has not changed since the days of Harry Vardon and will not change in the future. A player must be able to read the proper amount of break on a putt, roll the ball to the correct speed and start the ball on the intended line. It is as simple as that, and Vardon captures the essence of putting in his book.

“What I would propose is that, when the player has discovered the method that gives him the greatest confidence, he should remain faithful to it unless it fails him long and badly at some later stage and practice it for a quarter an hour whenever he has the opportunity. In these periods he will learn much as to the strength that is required in striking the ball and the degree of ‘borrow’ that is necessary on sloping greens.”

As a coach, I do have certain beliefs on the fundamental mechanics of putting. However, the mechanics of putting is not as important as the repeatability of those mechanics. Remaining faithful to your putting technique is great advice and something I want my students to understand as well. Players must build a putting stroke that makes good sense and is supported by the physics and the science of putting. Then, spend the rest of your life perfecting the technique. I do believe the best putters can read the right amount of “borrow” or break on a putt and then are acutely skilled at controlling the pace of the putt.

In 1903, Vardon contracted tuberculosis and spent eight months in recovery. Once he started playing again, he began to develop the “jumps,” as he referred to an uncontrollable spasm of the hands precisely at the moment of impact. Today we call this the yips or the clinic name of focal dystonia. This is a condition that athletes are faced with in activities that call for the initiation of the motion, such as pitching a baseball, throwing darts, and hitting a golf ball.

“I am sure that all my bad short putts – and they have been many – have been the result of moving the body, which has been the outcome of the right arm ‘jump’ and consequent tightening of the grip.”

Curiously, tuberculosis can damage the body in many ways, including peripheral neuropathy. Peripheral neuropathy is a condition that does affect the nerves of patients with tuberculosis. Essentially, the myelin sheath surrounding the nerve is damaged, resulting in a disruption of neurological messages from the brain. In highly skilled athletes, the myelin surrounding the nerves builds up over time, speeding the signals from the brain to the muscle tissues and improving efficiency and mastery of a skill. In Vardon’s case, tuberculosis may have been the culprit of the yips.

“Perhaps I need not remind the reader that my reputation as a holler-out is deplorable. How many short putts I have missed during the past fifteen or twenty years I should not like to estimate. They must number thousands.”

The current understanding about this condition is to have those that suffer from focal dystonia change something to force the brain to build new neurologic pathways. This is exactly what Vardon experimented with for the remainder of his career. He even tried putting left-handed on his short putts with some good success.

“Personally, I have made successful experiments at times – in public matches, it may be added – with left-handed putting. I have adopted this expedient when a right arm ‘jump’ has been causing me to clutch the club extra tightly with the right hand the instant before impact. Nearly every golfer has experienced this ‘jump’ at some time or other: it is born of over-anxiety to do well and is uncontrollable.”

Vardon was on the right track with his experimentation, and if only would have tried the long putter that Bernhard Langer used to revive his career after struggling with the ‘jumps,’ he may have won a few more major championships. The yips have been around from the early days of golf and, sadly, will be with us as the game is played over the next century. It is comforting to know that there are real solutions for those that suffer from the yips, jumps, or any similar term to describe that sudden spasm at impact that strikes fear into the hearts of golfers everywhere.