Is Your Stick Stuck?

Is Your Stick Stuck?

Is Your Stick Stuck?
By Dr. T. J. Tomasi, Keiser University College of Golf Senior Faculty and Director of Research 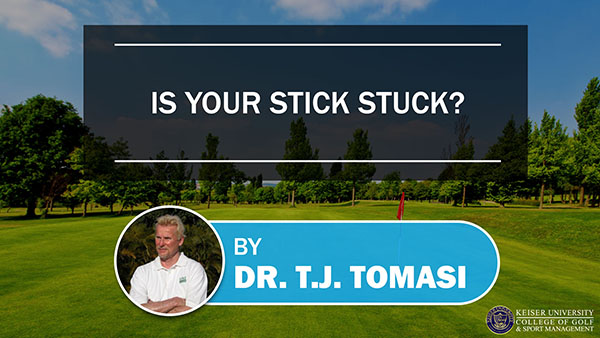 When Tiger Woods hits a bad shot on TV, the commentators often say, ‘He got the club stuck behind him.’ What they are referring to is a serious but common sequence problem. Woods is the poster child for ‘getting stuck.’ He turns his hips so quickly on his downswing that it makes it hard for his right elbow to get even with his back hip coming to the ball. This causes the club to approach the ball so far behind his body that he can’t square the clubface at impact. Getting stuck is the better player’s mistake – a higher-handicap golfer often does the opposite: In a hurry to hit the ball, the clubhead races ahead of the body, a mistake that’s called over-the-top. If the push-slice is your miss, you’re probably stuck; if you pull-slice, then it’s almost certainly over-the-top.

When one of my students ‘gets stuck,’ I ask him or her to swing with a soccer ball between the knees. The soccer ball quiets the hips, giving the player the feeling of making a lateral move before the hip rotation begins. This allows more time for the trail elbow to catch up with the hip. 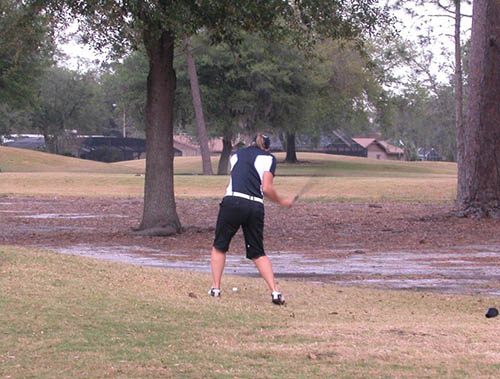 This young lady’s hips have rotated too soon, trapping the club behind her. Note how the elbow is way behind her right hip. Unless she flips her hands just right through impact, this shot will shoot to the right, into the trees. 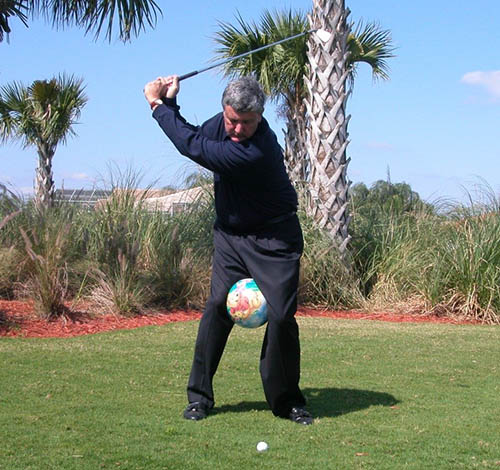 Because he’s compressing the ball with his thighs, this player won’t be as likely to spin his hips to the left. The small lateral bump of the hips toward the target gives him plenty of time to slot the club correctly.