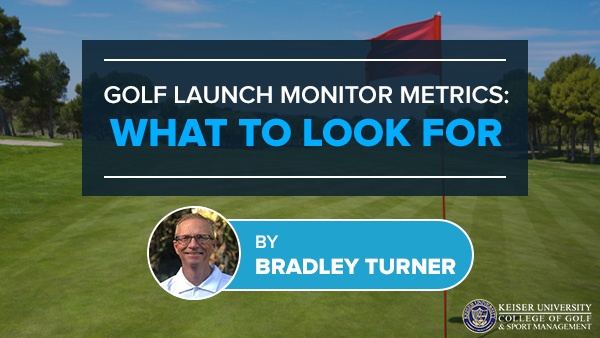 The first significant technological advancement in golf instruction was in the 1990s, when coaches began to use slow-motion video. This allowed golf coaches to evaluate what was really happening in a student’s golf swing. Studying videos of world-class players became a must endeavor for any golf instructor with a desire to be exceptional. Video analysis is used today to get a picture of a golf swing and give a golf coach visual evidence to form a plan of improvement. It is usually the first step in the analysis process. I like to compare it to a doctor ordering an X-ray for a patient. The X-ray is valuable information, but it does not always tell the doctor the entire story.

The problem with video is that coaches are unable to measure slight changes in a golf swing resulting in a corresponding change in ball flight. Over the past decade, launch monitors have become the MRI in golf instruction as the data provides incredible information for the golf coach. Launch monitors have become accessible to avid golfers as the influx of competitors entering the market has driven down the price point of the product. Understanding the launch monitor metrics is becoming a requirement for golf coaches as golfers are finding themselves using these products at an ever-increasing rate. I have had over a decade of experience using some of the great technology we offer at the College of Golf at Keiser University. If you send me your launch monitor metrics, I will be able to determine the quality of the strike. Unfortunately, I will be unable to determine how consistent you are in reproducing the launch monitor data.

I have broken down this article into three separate sections; distance factors, directional factors, and factors that lead to good ball compression. I have also provided TrackMan data from Zach Johnson, Jon Rahm, and Justin Thomas to give you a supplemental guide to understanding these metrics.

Golfers are consumed with more distance, and it is often a reason to seek golf lessons. If you want to hit the ball farther, it makes sense to understand a few of the important factors:

This is an easy one. The faster you can swing the club head, the more potential distance you can hit a golf ball. Technique, athletic ability, swing sequencing, and optimal use of ground forces are all additional influences on club head speed. Launch monitors will give us the data, but not the reasons behind the data!

This is what golfers seek, maximizing their ball speed. Whenever you have made excellent contact with the ball, you have most likely hit the ball center face with the club head. Hitting the ball in the center is a sure sign of optimum club head speed. There are factors such as path and face angle that may take away ball speed, but the main idea is to maximize speed by hitting it solid.

Smash factor measures the optimum ball speed on a given golf shot. The maximum smash factor is 1.50, which has been established by the United States Golf Association (USGA). If a rating exceeds 1.50, then the ball or driver is determined to be illegal for tournament use. Smash factor is the ball speed divided by the club head speed. If your club head speed is 100 mph, the ball speed cannot exceed 150 mph. As you can see with the three tour players, they have a consistent smash factor rating of 1.49, which tells us that they are hitting it very solid and in the center of the club face. That is no surprise to anyone!

Smash Factor values go down with a more lofted club. Imagine using the same length shaft with your 5 iron and your pitching wedge. You should be able to swing both at the same club head speed, but the ball speed will be different. Which club will hit the ball farthest? As loft decreases, so does the smash factor rating. Suffice to say, a 1.40 smash factor rating with a 6 iron is good stuff!

Many golfers do not understand the influence of club path and face angle on the ball flight. If they really comprehended these two metrics, they would most likely be able to fix their chronic slice. It amazes me that golfers can play for years, hitting a slice, without understanding why it happens! That is for another article, so here are some important concepts on club path and face angle.

This is the metric that will confirm a golfer’s ability to control the curve of a golf ball and hit a ball that ends up by the intended target. The face angle at impact has the most influence on the direction of ball flight of any launch monitor metric. A face angle with a positive (+) number is pointed to the right of the target, while a negative (-) value is pointed to the left of the target. Those that control the face position through impact are the golfers with the lowest handicap!

The difference between the face angle and club path is called the face to path variance. A negative (-) variance indicates the face angle is oriented to the left of the club path resulting in a ball flight that curves to the left. A positive (+) variance indicates the face angle is to the right of the club path resulting in a ball flight that curves to the right. The higher the value of the variance, the more curvature on the ball flight. When the face to path variance is zero, then there would be no curve on the ball at all. For a ball to end up by the target, a player must orient the face more towards the target than the club path. For example, if the club path is four degrees to the right, the club face variance must be about 50% of the path direction. In this case, the variance should be about -2 degrees.  A path of zero degrees and a face angle of zero degrees results in a perfectly straight golf shot. Zach Johnson has a path 6.6 degrees to the right, so for him to get the ball to end up on target, he will need to close the face relative to the path by about 50% or 3.3 degrees. Because of the higher variance value at 3.4 degrees, the ball flight of Zach’s 6 iron would curve much more than I would like to see.  However, in this case, Zach hit a very good golf shot that ended up near his intended target! There are a lot of ways to get it done in golf.

I was hitting some pitch shots a few weeks ago at a local golf course when a ball whizzed by me. I looked up, and the guy apologized for the skulled wedge shot. He then went about hitting more pitch shots with a practice buddy next to him. I could quickly tell by their technique that I was in the danger zone of another lined shot across the green, so I moved slightly to accommodate the two golfers. After a few minutes, one of them came over, and I sensed he wanted help. He said, “I was watching you hit beautiful pitch shots. Can you tell me how to do it?” If you are in the golf profession, this can become a common event; but I was happy to help him with something most golfers just don’t understand. I explained and demonstrated the proper angle of attack and that the low point of the golf swing occurs after hitting the ball. He looked at me stunned and shouted over to his buddy, “we need to hit the ball first and then the ground!” I am very certain I will explain and demonstrate this concept many more times in my career.

There are many more data points available with high-end launch monitors like TrackMan, which has been the premier launch monitor for many years. I have highlighted eight of the over 24 metrics TrackMan can measure in a golf swing. These eight will provide a solid foundation for understanding the next time you use a launch monitor. Data-driven evidence is a powerful tool for golf coaches in prescribing the ideal pathway for your game improvement.