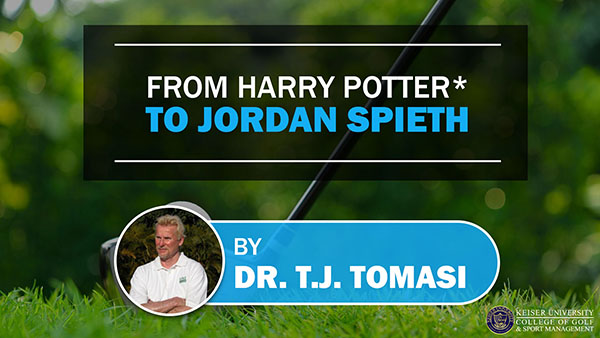 A Pensieve is a magical instrument used by Professor Dumbledore* to manipulate memories. Is this merely the product of a childlike imagination that exists only in a Harry Potter* work of fiction? Not anymore!

Research from the University of Southern California takes us another step closer to ultimately possessing an expert golf experience – or any other set of memories/skills we might desire.

Here’s what science says: The hippocampus is a brain area where important short-term memories held for 15-30 seconds can be converted to long term skills lasting years by a complicated electrical signal process tied to repetition. Head researcher Ted Berger has located two areas, CA3 and CA1, that are linked together by a code when an electrical message travels between them, thereby turning short term memory into permanently remembered experiences like motor skills. Working with test animals, Berger figured out the code then installed a device that strengthened the memories being generated by the brain, thus enhancing memory traces into long-term memory without the encumbrance of practice. In addition to enhanced memory, experiments with humans are now underway to implant packaged memories with the promise that you will be able to have ‘been there done that’ without having been there or having done that. This was the main theme of the 1990 movie Total Recall starring Arnold Schwarzenegger as a man who takes a “virtual vacation” to the planet Mars via the implant of dedicated brain environments.

Futurist Ray Kurzweil, in his book The Singularity is Near, predicts that by 2040 there will be brain scans that upload both mental and physical histories into a computer and thus become available for download to the brain of anyone who wants to change their reality. As Kurzweil describes it, “This process would capture a person’s entire personality, memory, skills and history.” And it would be entirely your choice. You could be Winston Churchill, Iggy Pop, or even Hillary Clinton before she had the Rodham removed – or you could opt for the ‘schizoid model’ and become all three at once. If you’re a golfer, you might choose the Jordan Spieth model with short game by Cory Pavin, circa 1996. No wonder space aliens have those big heads – they’re all prefab thinking and no practical doing – much like our current politicians.

Of course, with all those ‘memories’ there would be no need for golf teachers, equipment or even actual golf itself. Maybe, somewhere in the future, humans can permanently shelter in place, passing the time by binge loading endless streams of happy experiences – including, of course, great golf.