Four Drills to Help You Perfect Your Short Game

Four Drills to Help You Perfect Your Short Game 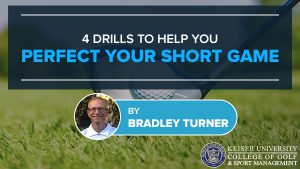 Scottie Scheffler displayed a blend of solid ball striking skill with an excellent short game to win his first major championship at Augusta National. Scheffler has won four PGA tournaments in six starts, something very few golfers have accomplished. To be the number one player in the world, Scheffler has shown brilliance in all facets of the game, including his mental toughness. For the average golfer, striking a golf ball like a tour player is…how should I say it…hmm…not going to happen. The best in the world spends a massive amount of time hitting golf balls in their practice sessions. Unless you have the time and resources to hit 500 practice balls a day, you are better off spending time on the short game. Here are four drills to help you perfect your short game…or at least improve these essential skills.

This is a simple drill you can use to provide feedback on your ability to land the ball in your intended spot. From the edge of the practice green, step off about five paces from your ball and place a ball on top of a golf tee. Grab your eight-iron and five golf balls. Your job is to land the practice balls on top of the teed golf ball…knocking it off the tee. A couple of important takeaways in this drill are to note the landing spots in relation to the target. Did the balls land about the right distance but were they left of the target or right of the target? What was the trajectory of each of the five golf shots? How far did the balls roll out after landing on the putting surface?

Next, grab your pitching wedge and do the same drill. Finally, finish with your most lofted club in the bag. The scatter pattern of your shots should ideally surround the target with some short, some long, and a few left and right. The five balls should also end up about the same distance away from you unless, of course, you hit your target in mid-flight! The eight-iron pile of balls will be furthest away, followed by the pitching wedge pile of balls, and your most lofted club will have a nice grouping of golf balls closest to you.  Practicing the Spot Landing Drill is a great way to hone your hand-eye coordination and help you visualize the right amount of airtime and roll out of your short game shots.

Line in the Sand Drill

The green side bunker shot is the only golf shot in which you do not contact the ball first. I have often heard announcers state that the bunker shot is one of the easier shots in golf. That is an absolutely false statement! The best players in the world can often struggle out of a green-side bunker. According to ShotLink data on the PGA Tour website, the average player will get up and down out of a bunker about 50% of the time. The data suggest that players are better when they are NOT in the sand but in the light rough around the greens.

The Line in the Sand Drill is an excellent way to test your skill in striking a specific point in the sand. With an alignment stick or the end of a sand rake, simply draw a straight line in the sand. Set up with the line directly in the middle of your stance. Take some swings attempting to enter the sand exactly on the line in the sand. Most golfers will hit the sand before the line, so make some appropriate adjustments to ensure that you begin to hit the line properly. Once you have a good sense of striking the line, place a ball three inches in front of the line. When you set it up, make sure you can see the line. Focus on the line, not the ball!  A consistent bunker player is someone who has perfected the skill of entering the sand at the same point every time.

A good friend of mine has elevated his game as a senior player. He has won a few state senior open championships and has also played in two US Senior Opens. He has put in plenty of practice time and gym time as part of the formula for success, a recipe for any golfer. I asked him if there was anything in particular that helped him shoot lower scores. One of the drills he would use is the three-foot putt drill which sounds easy until you give it a try.

Get five coins and five good balls to putt with. Measure three feet from the edge of the cup in five different directions around the cup. Count how many in a row you can make without missing. The goal for a great putter is 100 in a row. I went out and gave the drill a try and promptly missed on my 9th putt.  I started over and managed to get to 38 before I missed. Like a true golfer, I blamed the green conditions for my poor performance, but the reality is that it is very difficult to focus on each three-foot putt. That is the most important benefit of the drill, to increase your ability to focus on the task at hand.

According to ShotLink data, a PGA Tour player on perfect greens can make a lot in a row from three feet…like 865 in a row for Abraham Ancer, who never missed a three-foot putt in 2021. I found that statistic to be impressive, so I went back to the four-foot distance to see the difference. Sam Burns made 121 out of 123 four-foot putts in 2021!  The three-foot putt drill will build your ability to focus, and consequently, you will become a confident short-distance putter. You might not make 865 in a row, but you will be much better from the knee-knocker range.

Putt to the Fringe Drill

Before heading to the first tee in your next round, make sure to hit some longer-distance putts. Sometimes the putting green can get a bit crowded with other golfers, so I like to find a long putt with my target being the fringe of the putting green. The goal of this drill is to roll the ball as close to the fringe as possible without actually ending up on the fringe. A perfect putt will just touch the fringe but stay on the putting surface. When you are putting to a distance and not the hole, it is surprising how the brain will become hyper-focused on distance. Hitting your putts in the center of the putter face is essential to gain control of the speed of the greens. Another great benefit of this drill…you will never miss a putt you think you should have made!

Spending some time on these four drills will not make your short game like Scottie Scheffler’s, but I am sure it will shave a few strokes off your game. Of all the golf skills, putting is the one most amateurs can develop into tour quality. Many amateurs across the country are good putters, and there are plenty with solid short games. I have always believed that developing a great short game is a choice a golfer must make. If you choose to improve and put some time in, you will!