First Tee Nerves at the Ryder Cup – Part I

First Tee Nerves at the Ryder Cup – Part I 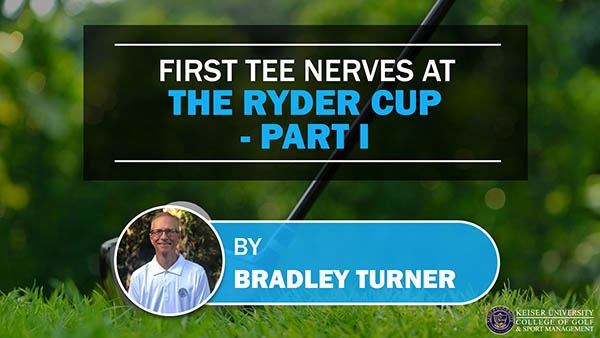 The Ryder Cup is only a few days away when the world’s best players convene at Whistling Straits in Wisconsin. The three-year wait for this bi-annual competition will have the golf world once again focused on two captains and 24 competitors from Europe and the United States playing for pride instead of millions of dollars. With no purse to play for, it would make sense that it would be more like an exhibition match versus a heart-pounding and nerve-racking experience for the competitors. For some reason, the Ryder Cup experience is completely the opposite of an exhibition match as it brings out more emotion in the world’s best players than in any other event they will play.

The inaugural Ryder Cup was held in 1927 at Worcester Country Club in Massachusetts, with the US team beating Great Britain 9 ½ to 2 ½. The teams traded victories over the next few years, with Great Britain winning in 1929 and 1933, while the US team was victorious in 1931. The record tallied to an even two wins for both teams through the first four Ryder Cup competitions. At the time, this appeared to be an evenly matched competition, but things slowly started to change as World War II approached. America would soon dominate the competition from 1935 to 1977, winning every event with the exception of 1957 and a celebrated tie in 1969. Media coverage was sparse since the world knew what the outcome would be before the event was even played. America would win another Ryder Cup. The matches had become an exhibition match since the US teams were far superior in the depth of talent than the Great Britain teams. The end of season date in September or October never inspired adequate media coverage with college football and the NFL hoarding the limited television time.

Starting in 1979, through the influence of Jack Nicklaus and the new superstar from Spain, Seve Ballesteros, the Great Britain team was expanded to include any player from continental Europe. Even with Seve as the reigning Open champion, America continued to bully its opponent in 1979 and 1981.  But in 1983, the European team was no longer the punching bag for the confident US teams. Europe almost won that Ryder Cup, but thanks to some clutch play during the Sunday singles matches, America narrowly defeated Europe 14 ½ to 13 ½. The era of American dominance was coming to an end.

In 1985, after successfully defending the Ryder Cup since 1957, America lost the Cup to an energized and motivated European team. The host site was The Belfry in England, and with thousands of supporting fans, the years of frustration and defeat were finally over for Europe. This was not just a win for England, as the entire European continent celebrated the victory. The American team flew home determined to bring the Cup back to America in 1987. But the European team stunned the golf world with another victory, and they danced on American soil while the losing team watched in stunned silence. In 1989, the Ryder Cup was halved with both teams accumulating 14 points each. This exhibition match was no longer an exhibition. This was becoming a must-watch competition.

The television coverage of the 1991 Ryder Cup was presented for the first time by a major network, NBC.  Clearly, the executives at NBC believed there was enough interest to televise the live coverage of the Ryder Cup. The host site of the event was Kiawah Island, and the course brought out some of the most dramatic golf yet televised. The American team won with adrenaline-filled Sunday singles match victories that resulted in this version of the Ryder Cup being named “the war by the shore.” The emotion was evident on the faces of both teams. Television was capturing the joy of winning and the heartbreak of losing. The Ryder Cup theatre was building into the biggest golf event of the year.  Most importantly, the players wanted to play in the event and represent their country, teammates, and their fanatical fans.  The pressure of these constituents was becoming enormous for even the 24 best players in the world. Playing for a few million dollars was certainly easier than playing for country, fans, and teammates.

This year’s event will certainly have a handful of rookie Ryder Cup competitors stepping up to the first tee and experiencing Ryder Cup pressure. Just as anyone experiences something new for the first time, certain situations can produce high anxiety and extreme nervousness. For the occasional golfer stepping up to hit the first tee shot in a club championship, they can experience a very similar reaction. For the Ryder Cup rookies, it should be much easier since they are world-class players. But that is not the case.  They will be very nervous. Here is a glimpse of what they will be feeling on the first tee, with massive grandstands surrounding the tee and 10,000 or more boisterous fans watching:

“I was the shortest hitter in the group but outdrove everyone by 20 yards. I was so wired and jacked with excitement.” Jim Furyk

“I was very nervous. You try and put your ball on that tee, and it takes you a couple times to get it to settle on there.” Rory McIlroy

“It was probably one of the most nervous times I’ve ever been on a tee box. I was sure glad I was hitting a driver. It would not have been a fun shot with something else.”  Dustin Johnson

“The Ryder Cup truly feels like a sporting event; a football game, a basketball game, whatever it is. It’s loud and people are not afraid to boo you. That’s fun.”  Brooks Koepka

“I go and step up on the tee, I get there, and my adrenaline is just through the roof, and I look around, and I feel like all the air has just got sucked out of the room when they announce us to hit.”  Patrick Reed

“I’ve never been so nervous before on a golf course. Rather than worrying where the ball was going to go, the primary focus was…was I gonna make contact?” Paul Casey

“When you’re over the ball, you just hit and pray. Everything shakes, knees, hands…the ball is just a blur. It is funny how in half a second you have no control over what is happening in your body.” Nicolas Colsaerts

How do these athletes perform at the highest level when moments before they are almost terrified to hit a golf shot? Performing to your potential in these nerve-wracking moments can set you up for a great day on the links, or if the first tee jitters take over, the day can be a long one.

In Part 2 of this article, we will explore some strategies that these Ryder Cup players will implement when they step up to the first tee. You can take these same strategies with you and learn to embrace the anxiety of that exciting and anxious opening tee shot.

END_OF_DOCUMENT_TOKEN_TO_BE_REPLACED

8 Methods for Staying Calm While Golfing

The Importance of Golf Posture