Don’t Lay Up to Your Favorite Yardage

Don’t Lay Up to Your Favorite Yardage 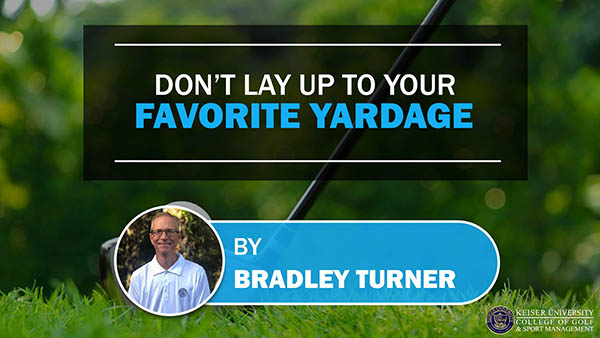 There are many misconceptions in golf that have permeated the minds of avid golfers for many years. Incorrect ideas such as keeping the left arm perfectly straight, pause at the top of the backswing, keep your right elbow close to your side, and the all-time worst advice in golf, do not lift your head in the golf swing! There is an element of truth in these ideas, but golfers misinterpret these concepts and struggle to apply them properly. Another seemingly good idea is to lay up to your favorite yardage. The concept in this wisdom is that a player will have the ability to maximize backspin when the swing is at the highest rate of speed. The combination of effective club loft at impact and club head speed will produce a predictable ball spin rate. The faster a player swings the golf club, the more backspin can be produced. That is why we see PGA tour players spinning the ball so much during tour broadcasts. What is the genesis of this seemingly sage advice?

The Genesis of Favorite Yardages

Prior to the 1980’s, the most lofted club in the bag was the sand wedge, which had 56 degrees of loft. The pitching wedge had 52 degrees of loft, followed by a 48-degree 9 iron. Groove technology was limited and resulted in the need for golfers to maximize the spin of the golf ball by swinging more aggressively. In addition, PGA Tour players did not have the advantage of a 60-degree lob wedge that is common today. Suffice to say, a 65-yard shot onto a firm putting surface with a 56-degree sand wedge is more difficult than a 60-degree lob wedge. The wisdom of the day was to lay up to a favorite yardage and make a full swing to maximize spin. In those days, that was good advice.

From Novice to Skilled Amateur Golfer

As players improve their ball striking skill, one of the common areas of weakness is from 100 yards and in. The reason for the challenge is that these finesse yardages require a player to control the speed of the swing. For a skilled amateur golfer, the ability to take speed away from the golf swing can sometimes be challenging. This is very similar to a skilled baseball player taking velocity off a throw to the first baseman. It is much easier to fire the ball with authority to first base. If you are a baseball fan, you have seen this problem many times at the MLB level, short throws to first that end up in the dugout. Much like a skilled golfer, the MLB player would prefer a “full swing” versus a “part swing.” Unlike a beginner golfer who wants to be as close to the green as possible, an average skilled golfer may prefer a full swing if they have not developed the skills needed from within 100 yards. Thus, the advice of laying up to your favorite yardage is consistent with their own experience. Instead of developing a weakness, many players will implement the advice of laying up to a favorite yardage.

There are very few PGA Tour players who are not fantastic from 100 yards and in. The ability to control clubhead speed and ball speed is one of the main differences between the best players in the world and the average club champion. To be a scratch or better golfer, you must develop a repertoire of shots within 100 yards. For the PGA Tour players, this is an area where there is a high level of focus and continual practice to maintain their skill level. So what story does the PGA stats tell us when it comes to laying up to a favorite yardage?

Here are the findings from the PGA stats during the 2021 golf year. The proximity distances are for the average PGA Tour player and the percentage of putts made from stated distance.

By looking at these yardages and the resulting proximity distances, there is clear evidence that the average PGA tour player is much better off getting the ball as close to the green as possible versus laying up to a favorite yardage. I am a believer that the advent of the lob wedge has given skilled golfers the opportunity to control the ball from closer distances to the green. Phil Mickelson uses a 64-degree lofted wedge, and we know what kind of a magician he is around the greens. The lob wedge has enough loft to launch the ball at a higher trajectory and increase the spin rate of the ball. Both of these outcomes lead to more control of the ball from short range. The PGA Tour player, much like the novice golfer, prefers to be as close to the green as they can get. For those that are challenged from shorter distances, make sure you have a 60-degree in the bag and then start hitting a bunch of 50-yard shots in your practice sessions!

Stay in the Fairway

One important key in getting the ball closer to the green for an easier shot to the hole is to keep the ball in the fairway. Even the lob wedge does not mitigate the challenge of hitting from the rough. If you are hitting from the rough within 50-100 yards, you might as well try for the center of the green. If the PGA Tour players have difficulty hitting it close to the hole from the rough, so will you. Today, we no longer ask players to lay up to their favorite yardage. Instead, we ask them to get the ball as close to the green as possible, but stay in the fairway!