Curing the Slice with the Driver

Curing the Slice with the Driver 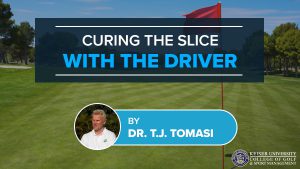 Most golfers, whether right or left-handed, slice the ball. Ninety percent of right-handed golfers aim to the right when they first take up the game and are forced to spin their shoulders to pull the ball back to the target. The right-to-right slice starts to the right of the target and then inexorably moves farther right until it disappears from sight. Of all the slices, this one can leave the playing field the quickest.

Since the ball is flying so far right, it’s an automatic adjustment to open your stance, aiming to the left of the target – but now the ball starts way left and slices back toward the target. Aiming more left works until you make a good release and square the face resulting in a pull way left of the target.

To correct the pull, you introduce a chicken-winged front arm that opens the face at impact, causing a slice to finish to the target’s right. To fix this, you aim even more left and employ more chicken-wing, thus creating the mother of all boomerangs that starts way left and exits into the bushes to the right of the target. In a left-to-right crosswind, it covers more territory than Lewis and Clark.

The natural evolution of your slice outlined above occurs over time, and it explains why there comes a time when you can no longer play your slice accurately because you’re not sure which slice you’re going to hit.

How to Fix It

The task on the practice tee is to start the ball right off the target (left for lefties) and then, by making the changes below, spin the ball back toward the target – i.e., a draw: here is the thinking that accompanies the physical effort.

1) Understand that your goal on the learning tee is to aim the clubface at the target but swing to the right of the target. Thus, the face is closed to the path producing a draw.

2) Align hips and feet to the right with shoulders slightly closed. Remember, this only works if the face is aimed at the target at the address!

4) Keep hands on the toe line during takeaway and ensure they are inside the club head. 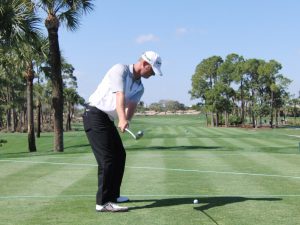 5) Start back to the ball, loop the club head to the inside – feel like hands are tucking in the back pocket. This move becomes automatic after practice, with the trigger transferring pressure onto the front side to start the downswing.

6) Let the forearms rotate through impact to shut the face. At first, you may have to exaggerate until you dial back to a natural release of the forearms. The last thing you need to be trying to do on the golf course is time the rotation of the forearms, which for a good player, is an unthoughtful movement that comes with practice (repetition).

7) When it’s time to play, don’t keep score until it’s in permanent memory. 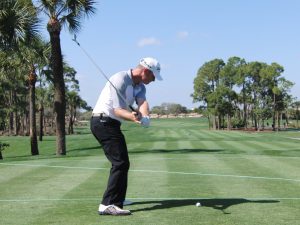 It’s counterintuitive – the inside/out swing path (arrow) feels as if you’ll hit it way right but have patience – soon, it will go down the middle.

Takeaway: A significant barrier to learning to draw and fade the ball at will is persistence. A promising player who gives up after the ball flies into the bushes a few times has forgotten how many repetitions it took to learn to swing incorrectly. Once the bad is ingrained, no correct swing theory alone will overcome it. The only way to change long-term memory is with physically based repetition based on correct swing principles.