Are You too Old to Pursue a Golf Career?

Are You too Old to Pursue a Golf Career? 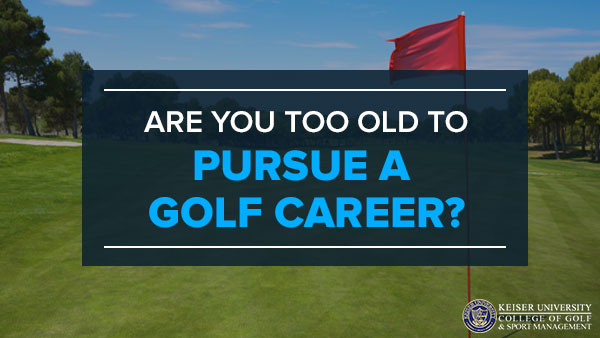 Millions of people around the world dream of a golf career. What could be better than waking up every morning and spending your days on a beautiful golf course? Not much, really, but obtaining that golf career isn’t easy. It takes years of dedication to receive a PGA Tour card.

Nearly all professional golfers began playing the game as children and developed their skills during their youth. But a small minority of professional golfers didn’t pick up the game until their teenage years or later. Like most sports, a player’s golf game isn’t something that can be developed quickly, and it takes years to hone each shot. With advancements in a variety of areas from nutrition and training to golf pro schools and professional golf colleges, there are ways players can enter the profession later in life.

The Greatest Golfer No One Knows

Larry Nelson wasn’t an old man by any standards when he learned to play golf, but by the standards of learning the game for the first time, he wasn’t young either.

During Nelson’s tours of Vietnam, he began to learn how to golf at the ripe age of 21. Nelson’s introduction to golf wasn’t the typical way most players find the game. The Georgia-native was taught to play by a fellow soldier in the south Pacific. The golf bug bite Nelson hard and the former high school star athlete studied the game every spare moment he had.

Upon returning home from war, Nelson dove headfirst into golf, and within a year was shooting under 70. In 1971, the budding player turned his new hobby into a golf career at the age of 24. Three years later, Nelson qualified for the PGA Tour.

Nelson’s story would be great if it finished there, but it only gets better. The late bloomer won PGA Tour events and in 1981, as he had just entered his mid-30s, Nelson scored his first PGA major victory. Two more would follow in 1983 and 1987 as Nelson continued a golf career that seemed unlikely when he turned pro in the early 1970s.

Nelson’s story is one that shows it isn’t too late to pick up the game.

The Oldest Golfer to Turn Pro

The oldest person to become a pro golfer is Allen Doyle, who turned pro at the age of 46 and qualified for the PGA Tour at 48. He would go on to win 11 PGA Tour Champions victories.

Doyle is proof that it’s certainly possible to become a pro golfer in your 40s, but it is unlikely. Jim Rutledge is another golfer who didn’t qualify for the PGA Tour until he was 47, although he turned pro at the age of 19.

The evolution of sports and sports science has seen athletes prolong their careers for years longer than decades ago. According to a 2013 study, the average age of PGA tour golfers is around 35-years old.

The good news from the research is that players can still turn professional even in their early 30s. It was also found that the best years for a golf professional are between 30 and 35, although plenty of tour players have shown they can still win tournaments in their 40s. Mental and physical skills begin to decrease as humans get into their late 30s, so anyone planning for a professional golf career better have received their tour card by then.

Nutrition and fitness may not be the first words associated with golf, but they play a major factor in a golfer’s performance. Like all professional athletes, golfers have a fitness routine and must stay physically fit to play at a top-level.

John Daly may have won without having a true workout regimen and diet. However, players like Daly winning on the tour is an exception rather than the rule in 2021

It isn’t just fitness routines and nutrition that have helped golfers extend their careers. Clubs and balls have been improved over the years as well.

Golf companies have continually redesigned their clubs to provide better distance and accuracy as players get older. Balls are also designed with players and their abilities in mind. Golf companies provide players with balls that suit them and these “provide a golfer with proper spin rate, ball speed, launch angle and maximum ball flight”.

A lot of technology goes into the equipment golfers use, and the right tools could help a player begin their golf career much later in life or keep that career going.

Although there are ways for players to get into golf at a later age, it isn’t the easiest task to accomplish. Larry Nelson proved that a player in his 20s can learn and master the game, but the reality is that few players can expect a golf career by taking his route into the professional ranks.

The good news for passionate golfers is that a career in the golf industry does not require the golf skills of Larry Nelson or the youth of a Jordan Spieth. If you’re serious about a golf career, contact us today and get started with a degree in golf management. 888.355.4465 / 561.478.5500