10 Words and Phrases that Should be Eliminated from Golf Terminology

10 Words and Phrases that Should be Eliminated from Golf Terminology 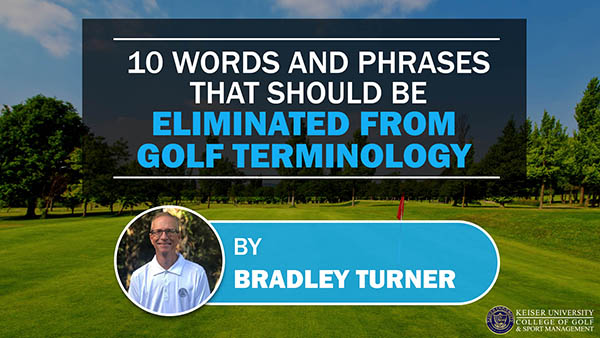 Perhaps it is the ancient roots of the game in Scotland, or maybe golfers just like to use interesting words — the result is a sport rich in colorful vocabulary. Unfortunately, some of the golf terminology used in 2021 is outdated, or incorrect, or just plain silly. Let’s look at some of these unremarkable words and phrases in golf terminology.

This might be the most annoying phrase while watching the PGA Tour on television.  Where did this come from? It appears as if this all started at the US Open in 2002.  Bethpage on Long Island was the venue for Tiger’s second US Open victory and happens to be where many Howard Stern fans call home. The shock jock’s executive producer is Gary Dell’Abate, and his nickname is “Baba Booey”. Apparently, some Howard Stern fan wanted to be noticed while attending the tournament and shouted out baba booey. Well, it certainly caught the attention of viewers and Stern fans. If you respect the game, please don’t shout that phrase out on a golf course.

This is a slang term used across America about the correct terminology of a Four-Ball match. This is one of the most common games played at country clubs and public golf courses throughout the country. According to the USGA, golf’s governing body on rules and competitions, “Four-Ball is a form of play involving partners where you and your partner compete together as a side, with each of you playing your own ball, and your side’s score for a hole is the lower score of the two of you on that hole.” There is no reference to best ball in the USGA rule book.  America plays four-ball matches all the time; we just don’t know that!

For well over a hundred years, golfers have found their golf balls in “casual water” and have taken appropriate relief. Casual water is simply excess water on the golf course that will influence the stance or lie of the golf ball. A free drop has been granted to golfers, but not anymore. Today, golfers DO NOT get relief from casual water.

In 2019, the USGA changed the term casual water to temporary water, which is defined as any temporary accumulation of water on the surface of the ground (such as puddles from rain or irrigation or an overflow from a body of water) that is not in a penalty area and can be seen before or after you take a stance (without pressing down excessively you’re your feet).

Therefore, no more relief from casual water, but you do get relief from temporary water, which makes sense to me.

This is another change from the USGA.  Designated drop zones are no longer part of golf terminology. However, you can drop a golf ball in a Relief Area. The last golf course I played had a nice “drop zone” sign for my playing partner to drop his ball. It looks like golf facilities need to update their signage as not to confuse golfers any further.

Get in the Hole

Keep Your Head Down

Eliminate this from your golf vocabulary today. NEVER try and “keep your head down” in the golf swing. Anybody that asks you to keep your head down is someone with who you do not want to be associated (at least on the golf course). It is amazing to me how many people believe that the root cause of their poor golf shot was that the head moved before contact with the ball. Try this, sit in your chair with good posture and try and lift your head.  What happened, besides nothing? Heads do lift up on their own, spine angles move, the shoulders move, the hips move, and all of these will influence the appearance of the head moving. But to stabilize the head, you MUST focus on something other than the head itself. If you believe your head moves too much in the golf swing, get some help from a good golf coach. If they know their stuff, you won’t be focusing on keeping your head down anymore.

“Nice swing” is a courteous comment to a fellow playing partner whenever the ball flies in a somewhat desirable direction. As a golf coach for almost 40 years, I think this phrase serves to confuse golfers rather than offer praise for a good outcome. A good outcome is usually cause for celebration, but if you said “good outcome” every time your partner hit a good golf shot, that just doesn’t sound genuine. But the truth is that a good outcome is a combination of swing variables that come together and turn into a nice result. A bad golf swing is always bad, even if the outcome is good. I prefer “nice strike.” It’s complimentary and appropriate, even for those with a less than ideal golf swing.

The USGA has done a great job in simplifying the Rules and golf terminology. One word that is no longer used in golf is “outside agency”. Truth be told, the only people that actually used that phrase were tournament rules officials. Professional golfers would simply tell a rules official, “an animal or person deflected my golf ball!” I doubt a PGA Tour player ever uttered the phrase outside agency.

Today, we use the phrase outside influence defined by the USGA as, “Any of these people or things that can affect what happens to your ball or equipment or the course: Any person (including another player), except you or your caddie or your partner or opponent of any of their caddies, any animal, and any natural or artificial object or anything else (including another ball in motion), except for natural forces.

Suffice to say; an outside influence could be many different things that can influence your golf ball.

Hitting the ball toward the “pin” is another slang phrase that is not appropriate according to the USGA golf terminology police. There is no pin on the putting surface, but a flagstick is defined as “a moveable pole provided by the Committee that is placed in the hole to show you where the hole is.” Easy enough for me. But, in the Merriam-Webster dictionary, there it is; Pin 1d(3)- the staff of the flag marking a hole on a golf course. I wonder if the USGA knows that and will petition the folks at Merriam-Webster to make a change? In the meantime, aim at the flagstick, as that is where the hole is located.

Once again, America has adopted phrases that are not consistent with the official Rules of Golf. Whenever you find your ball in a specially prepared area of sand, which is often a hollow from which turf or soil has been removed, you are in a bunker. There are no “sand traps” on a golf course, but there are many bunkers. For many good golfers, sand can be a friend or ally in playing the golf course. It certainly doesn’t “trap” them from playing from the sand. On the other hand, many golfers get in the sand and seem to stay buried forever in the sand. Maybe we should call it a sand coffin?