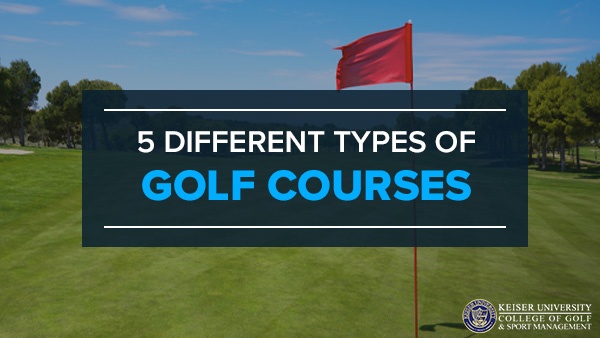 There are five main types of golf courses found around the world: links, parkland, desert, heathland, and sandbelt. Each type of course has unique characteristics and is found in very different locations. Although these course names are often thrown around in the golf world, some golfers may not be aware of the differences.

Links golf courses were first found in Scotland. The country is regarded as the “home of golf,” and the first courses were all links-style courses. Links courses are seen all over Scotland, and there are many more around the world.

In the United States, Pebble Beach is classed as a links course. It is possibly the most famous links course in the US and hosts PGA Tour events each year.

St. Andrews in Scotland is the most famous links course of them all. The links-style golf course is far older than its counterpart, the parkland. According to the BBC: “links courses are all about being one with nature.” It is this attempt to be one with nature that gives the look and feel of the course. The links’ look is very natural, and golfers play to the contours of the land.

Many links golf courses are found in coastal areas. Pebble Beach, which is located in California, overlooks the Pacific Ocean. The coastal location helps to create the hills, ridges, and fairways.

Golfers on a links course will play on sandy terrain that receives plenty of wind blowing off the ocean. The ridges and slopes on the links course are not man-made, or at least, only some are created by man. Most of the features on the golf course are all-natural rather than influenced by humans. Due to the lack of human modification of a links golf course, golfers may experience far more difficult shots. At times, there may be blind shots. In addition, players may hit shots uphill or downhill toward the green.

Another major difference between links and parkland is the openness of the course. Links are wide open without trees lining fairways. There is also a lack of water hazards. It is often said that links courses are far more difficult for golfers to play due to the layout of the course. There is also a wind element that blows the ball around and can cause scores to climb during a golf tournament. Once a golfer gets the ball near the cup, they can expect a very fast playing green.

Many people claim that links courses are the true test of a golfer’s ability. They are difficult to play, unforgiving, and have elements that make playing far tougher than parkland.

As golf moved away from the coastline, courses became very different. By going inland, courses became far greener, and trees became a feature of these new courses. Due to the courses resembling parks, they became known as parkland golf courses.

While a links course is largely natural, a parkland course is one that has been manicured and heavily constructed by a course architect.

A parkland course will have flat fairways compared to the rolling ones on a links course. The flat, well-manicured fairways make for gentle bounces. The fairways are also very forgiving.

Although Pebble Beach is an example of a links course that hosts a PGA Tour event, many of the courses that have tournaments are parkland. Myrtle Beach is another links-style course. However, over the years, the course has added more parkland features.

Although links and parkland golf courses are the most commonly found styles around the world, desert courses are becoming more prevalent in areas with a more arid climate. A desert golf course is built in an area with a natural desert. It is constructed amongst the sand dunes and natural desert features. The only grass found on this type of golf course is on the tee box, fairways, and putting greens.

A heath is an area of open land characterized by low-growing vegetation such as heather, gorse, and coarse grasses. The soil is sandy and firm, and the terrain is gently undulating—both of which are ideal for golf. Healthland courses, primarily found in Britain, are not as carefully manicured as other courses and thus require less maintenance.

Many of the finest courses in Britain are heathland courses. Some of the most prestigious include Sunningdale Golf Club, Woodland Spa, Alwoodley Golf Club, and Walton Heath.

Sandbelt golf is synonymous with one thing, the group of eight golf courses in the sandbelt region of Melbourne, Australia. These world-renowned courses are built on loamy soil with undulating terrain. They are carefully designed with lightning-fast greens and steep-edged bunkers. The mild climate of the region means that they can be played year-round.

The sandbelt courses have hosted many championship tournaments, and one course, the Royal Melbourne, is consistently ranked as one of the top ten golf courses in the world.